None (without shield)
Fire (sizzle shield)

None (without shield)
Ice (blizzard shield)

Large enemy
Shield Guard is an enemy in the Kirby series, debuting in Kirby Star Allies. While the enemy itself does not yield a Copy Ability when inhaled, the shield it carries yields the Fire or Ice ability, depending on which element it is imbued with.

Shield Guards are enemies with rabbit-like ears, light-brown feet, stubby arms, and a yellow body. Their mouth resembles that of Chef Kawasaki. The enemy also has eyes similar to Kirby's. Its mouth is open when it no longer has a shield, but wears a huge smirk when it does have a shield.

Shield Guard first appears in Donut Dome and becomes a somewhat common enemy. It slowly trudges back and forth, but when it sees Kirby, it dashes toward him. Its shield protects it from many attacks and projectiles (though it is vulnerable from behind). After taking too much damage, the shield breaks, leaving the foe defenseless. In this state, it cowers in place and is not a threat. Without their shield, Shield Guards can be destroyed in one hit. 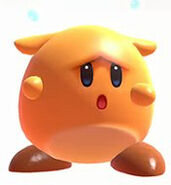 A Shield Guard after it has lost its shield.
Español 日本語
Community content is available under CC-BY-SA unless otherwise noted.
Advertisement