Shelby is an enemy in the Kirby series, appearing in Kirby's Epic Yarn and its remake, Kirby's Extra Epic Yarn.

Shelby is an orange snail with a blue shell and yellow and orange eyes. He has two yellow antennae and a yellow mouth.

Shelby first appears in the Dino Jungle stage. He later appears in numerous other stages, most notably Mushroom Run. When wrapped up and thrown by Kirby or Prince Fluff, he can destroy multiple Yarn Blocks and Cloth Blocks and can climb up walls.

Shelby's only form of attack is trying to ram into Kirby or Fluff. When in this form, he becomes indestructible. Getting hit by Shelby's ram attack will cause the hero to be crushed, rolled around, and lose beads. Shelby becomes dizzy after a while and can then be defeated.

Shelby's name is a play on words with the real name "Shelby," as Shelby has a shell on his back. 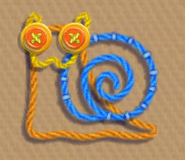