Sheep are the livestock of Mayor Len Blustergas in Kirby: Right Back at Ya!. Tended to by the shepherd, flocks of sheep appear in a number of episodes, but rarely have an impact on the show. It is seen that sheep are sheared for their wool and eaten as a delicacy, so they are not very different from a sheep in real life. These animals are also commonly devoured by monsters, such as Octagon and D-Rex.

Like the actual animal, sheep are covered in puffy wool, making them look almost like big cotton balls. They have tan faces with innocent eyes and no visible mouth. Small, curly horns grow out of their wool, and they have stubby gray legs.

Sheep are tranquil by nature, and are almost always sleeping or grazing. Once in a while, one sheep will run out of control, but won't cause much harm. Amon was a sheep that King Dedede ordered for dinner. He escaped, however, and ran far away. He was determined to escape his sheep lifestyle, and was transformed into a wolf after a bolt of lightning struck him. He returned to Cappy Town and turned the other sheep against the Cappies. The flock caused a lot of chaos in Dream Land, invading Castle Dedede, attacking the citizens, and even forcing everyone to bah like sheep. Fortunately, Tiff blew a shepherd whistle, and the sheep ended their malevolent reign. All of this took place in the episode, Sheepwrecked. 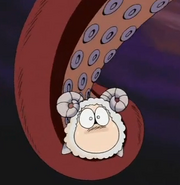 One sheep meets its doom to Octagon.

Octagon leaves a pile of sheep bones behind.

Kirby's ship crashes into the flock. 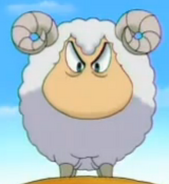 Amon in his sheep form.

Kirby after being knocked around by the flock.

Sheep in a cage, awaiting D-Rex.
Add a photo to this gallery
Retrieved from "https://kirby.fandom.com/wiki/Sheep?oldid=343603"
Community content is available under CC-BY-SA unless otherwise noted.