Shadow Kirby (also called Mirror-world Kirby) is the clone of Kirby that exists in the Mirror World, debuting in Kirby & The Amazing Mirror. He also appears in Kirby: Triple Deluxe as the final boss of the Kirby Fighters sub-game, and as an unlockable "palette" in Kirby Fighters Deluxe.

In Kirby & The Amazing Mirror, Shadow Kirby is like that of most members of the Kirby species, but colored dark gray with black feet and has black eyes. In Kirby: Squeak Squad, using "Shadow" paint on Kirby makes him look like Shadow Kirby.

In Kirby: Triple Deluxe, Shadow Kirby's eyes are pure white, and his skin is translucent and an alien purple shade. Shadow Kirby's body visibly swirls about like a vortex.

At the beginning of the game, Kirby and Shadow Kirby believe each other to be enemies. Shadow Kirby appears once in each of the mirror world's areas to attack Kirby, and if Kirby defeats him in combat, he will drop a random power-up, such as an Invincibility Candy or a 1UP.

During the fight with the final boss, Dark Mind, Shadow Kirby will appear if Kirby loses the Master Sword and throw it back to Kirby.

At the end of the game, it is revealed that the only reason Shadow Kirby attacked Kirby is that he just wanted to protect the mirror world and keep any foreign being out of it. Shadow Kirby decides to continue to protect the mirror world after Dark Mind is defeated just in case he returns. His relationship with Dark Meta Knight is not elaborated on.

When encountered, Shadow Kirby will jump out of hiding and proceed to attack Kirby by using a Copy Ability. If Shadow Kirby is not defeated within a short time limit, he will jump back into hiding and not reappear until the player re-enters the level. Notably, the Copy Abilities used by Shadow Kirby use the effects of their respective enemies. For example, when Shadow Kirby uses Fire, the fire stream produced will have the same appearance as that of the fire used by Hot Head.

Shadow Kirby appears as the seventh and final opponent of the Kirby Fighters sub-game when playing in single-player mode. He is fought in Another Dimension, and uses the same Copy Ability the player chose at the beginning of the mode. After being defeated, Shadow Kirby rises into the air and explodes.

Shadow Kirby reappears in Kirby Fighters Deluxe as an alternate skin for Kirby, unlocked by beating single-player mode on Very Hard difficulty once with any Copy Ability. The game treats Shadow Kirby solely as a cosmetic color scheme, and he no longer appears as a named adversary, with Team DDD replacing him as the final single-player opponent.

As of version 4.0.0, Shadow Kirby makes a cameo appearance in the world map of Fortress of Shadows - Jambastion, where there is a chance of seeing him riding a warp star in the distance. He seems to have returned to his original appearance from Kirby & The Amazing Mirror, rather than his nebula appearance from Kirby: Triple Deluxe.

Shadow Kirby can use Copy Abilities just like Kirby. In Kirby & The Amazing Mirror, he does not wear hats to show what Copy Ability he has. In Kirby: Triple Deluxe, he will mirror the ability the player selected at the start of Kirby Fighters Deluxe by clearly wearing a cap. 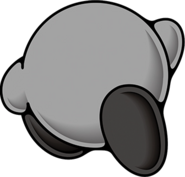 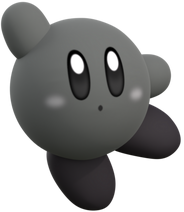 Kirby Star Allies
Add a photo to this gallery
Retrieved from "https://kirby.fandom.com/wiki/Shadow_Kirby?oldid=314020"
Community content is available under CC-BY-SA unless otherwise noted.