Kirby Wiki
Register
Don't have an account?
Sign In
Advertisement
in: Enemies, Characters, Articles with non-canonical information,
and 19 more
English

Shadow Kirby (also referred to as Mirror-world Kirby) is the clone of Kirby that exists in the Mirror World, debuting in Kirby & The Amazing Mirror. He also appears in Kirby: Triple Deluxe as the final boss of the Kirby Fighters sub-game, and as an unlockable "palette" in Kirby Fighters Deluxe.

In Kirby & The Amazing Mirror, Shadow Kirby is like that of most members of the Kirby species, but colored dark gray with black feet and eyes. In Kirby: Squeak Squad, using "Shadow" paint on Kirby makes him look exactly like Shadow Kirby.

In Kirby: Triple Deluxe, Shadow Kirby's eyes are pure white, and his skin is translucent and an alien purple shade. Shadow Kirby's body visibly swirls about like a vortex. In Kirby Fighters 2, he is now a gray shade instead of a purple one, likely to be more consistent with his Kirby & The Amazing Mirror design.

At the beginning of the game, Kirby and Shadow Kirby believe each other to be enemies. Shadow Kirby appears once in most of the Mirror World's areas to attack Kirby, and if Kirby defeats him in combat, he will drop a random power-up, such as an Invincibility Candy or a 1UP.

When found in Rainbow Route just before the Warp Star to Moonlight Mansion, he appears but doesn't attack. When found in Mustard Mountain, he uses Fire if not attacked. In his appearances in Carrot Castle and Radish Ruins, he uses Cutter. In Peppermint Palace, he uses Ice. In Candy Constellation, Shadow Kirby uses Bomb. Notably, the Copy Abilities used by Shadow Kirby use the effects of their respective enemies. For example, when Shadow Kirby uses Fire, the fire stream produced will have the same appearance as that of the fire used by Hot Head.

At the end of the game, it is revealed that the only reason Shadow Kirby attacked Kirby is that he just wanted to protect the Mirror World and keep any foreign being out of it. Shadow Kirby decides to continue to protect the Mirror World after Dark Mind is defeated just in case he returns. His relationship with Dark Meta Knight is not elaborated on.

Shadow Kirby appears as the seventh and final opponent of the Kirby Fighters sub-game when playing in single-player mode. He is fought in Another Dimension, and uses the same Copy Ability the player chose at the beginning of the mode. After being defeated, Shadow Kirby rises into the air and explodes.

Shadow Kirby reappears in Kirby Fighters Deluxe as an alternate skin for Kirby, unlocked by beating single-player mode on Very Hard difficulty once with any Copy Ability. The game treats Shadow Kirby solely as a cosmetic color scheme, and he no longer appears as a named adversary, with Team DDD replacing him as the final single-player opponent.

As of version 4.0.0, Shadow Kirby makes a cameo appearance in the world map of Fortress of Shadows - Jambastion, where there is a chance of seeing him riding a warp star in the distance. He seems to have returned to his original appearance from Kirby & The Amazing Mirror, rather than his nebula appearance from Kirby: Triple Deluxe.

In the Story Mode, Shadow Kirby is only fought in Floor 20 of Chapter 4 and Floors 25 and 45 of the Final Chapter. In the story, it is stated in pause screen descriptions that he thinks his battles with Kirby and his buddy are pranks of sorts, yet does not realize his strength and the trouble he is causing. Shadow Kirby also acts as the final foe in Single-Handed Mode. He is fought in his own exclusive stage, the Decisive Battlefield. Unlike in Kirby Fighters Deluxe, Shadow Kirby cannot be obtained as an alternate palette, as the color options are restricted based on player order.

Shadow Kirby can use Copy Abilities just like Kirby. In Kirby & The Amazing Mirror, he does not wear hats to show what Copy Ability he has. In Kirby: Triple Deluxe, he will mirror the ability the player selected at the start of Kirby Fighters Deluxe by clearly wearing a cap. 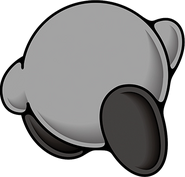 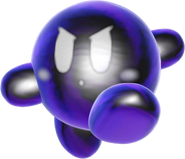 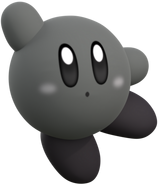