Bomb from missiles, Spark from drones, Beam from Metal Bits

Security Force is a short, gray robot that greatly resembles and behaves like Metal General, a boss that appears in Kirby's Return to Dream Land. Metal plates make up its outer shell; these plates form up to a fin-like point. The front plate has a red Haltmann Works Company logo adorning it; underneath this plate, lights that appear to be red eyes are visible. Its right arm is large and flat, while its left is shorter but is able to pivot quickly. Its blocky legs are shaped like trapezoids.

Security Force only appears in the game's sixth area, Access Ark. As the mid-boss's name implies, it serves as the security of the headquarters of the Haltmann Works Company.

Before it is approached, Security Force will be inactive; however, when it is approached, it will activate, releasing steam from its top. Security Force may employ a variety of attacks, many of which are similar to those used by Metal General. These include using a laser blade attachment on its left arm (which can be used to both slash and charge), shooting missiles (which grant the Bomb Copy Ability when inhaled), dispersing three mines, sending out three Metal Bits and shooting sparks while in the center of the battle arena. When Security Force is defeated, a button will appear in front of the robot. Security Force will press this self-destruct button, causing it to explode and release damaging fire that will fall and remain on the ground for a few seconds. Security Force is unable to be inhaled after its defeat due to this self-destructing process. It can be destroyed before it self-destructs, however, preventing the field of fire from appearing.

In addition to being faced as a normal mid-boss, many Security Forces can be seen charging at Kirby while he is flying in the Jet Mode of Robobot Armor in certain segments of some stages. In these segments, Security Force can take only a few hits before it is defeated.

Security Force also appears in its 2.0 form in the sub-game Meta Knightmare Returns.

Security Force rises into the air before exploding. 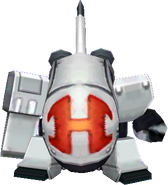