Scope Shot is a 1-4 player sub-game in Kirby's Return to Dream Land. It is the second sub-game to be unlocked (after Ninja Dojo), available once the player has collected at least 30 Energy Spheres.

In Scope Shot, the player's objective is to destroy a robot in fewer than 120 seconds by aiming the Wii Remote at the screen and shooting at the vulnerable pieces of its body. While doing this, the player must shoot down the robot's attacks to prevent Kirby and his friends from being stunned. The robots in this sub-game resemble mechanical versions of characters from prior games in the Kirby series.

Players can charge their shots by holding down the A button for a brief moment before releasing it. A charged shot has the same strength as five normal shots. All shots have travel time and do not immediately hit their targets when fired.

When sections of a robot's exterior armor are hit enough times, they fall apart to reveal the internal framework. This is largely cosmetic, however, since the robot is only destroyed once its health is completely depleted. The internal framework cannot be damaged by the Scope Shot, as the shots merely bounce off and make a metallic sound.  When the robot's health reaches zero, an orange, glowing weak spot will be revealed.  Once this area is shot once (even with a normal powered shot), the robot will explode. To counteract this, the robot will move more erratically to try to make its weak spot harder to hit.

Multiple times per stage, Kabula will appear in the background.  She does not attack, and each time the player can defeat her with one shot to receive 800 bonus points. More infrequently, UFO will also appear, giving a greater amount of points when shot. 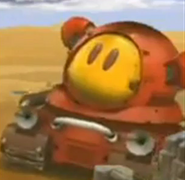