Kirby Wiki
Register
Don't have an account?
Sign In
Advertisement
in: Articles in need of images, Articles with non-canonical information, Kirby: Right Back at Ya! Episodes
English

Scare Tactics - Part II is the 53rd episode (46th in Japan) of Kirby: Right Back at Ya!. It is the conclusion of the two-part Scare Tactics episode and features appearances by Gabon and Sharbon, one of the winning entries of a contest for drawing one's own character for the episode. The red paint (which is used for its likeness to blood) makes this the most gruesome episode in the series.

While seeking shelter in a haunted mansion in the graveyard from the rain, the kids are in for the scare of their lives when they find all kinds of paranormal activities going on within the mansion. But soon enough, they see and believe that King Dedede must be behind the mansion's paranoia. They decide to pull pranks on him and Escargoon that scare them all over the mansion. Eventually however, the dastardly duo learns from the N.M.E. Sales Guy that the mansion was just a trap to lure Kirby into. When that fails, the N.M.E. Sales Guy decides to send over a certain bone-tossing monster to do the job for him.

The episode starts off with a recap of the previous part of the episode left off. Tiff and Kirby huddle together as moving, glowing lights form a shape vaguely similar to eNeMeE. Tuff leads Meta Knight to the haunted house while the spirits scare and chase Tiff and Kirby around the house. Meta Knight tries to destroy the door with Galaxia, fails, and declares that eNeMeE's presence is very strong.

Kirby and Tiff enter another room, where a moving statue with eNeMeE's voice scares them. They try to run up a staircase, but Tiff realizes the stairs go on forever. A bat knocks down Kirby and causes him to slide down the banister and almost get stabbed by the transforming statue at the end of it. He slams into a statue of a warrior and nearly gets killed when its sword and hand fall off. More spirits come out of the statue and chase the two. They enter another, creepy room with blood oozing out of the centerpiece and spilling out of the carved mouths. Tiff and Kirby run upstairs into a very noisy, scary, and flashing room filled with all kinds of scary clocks.

King Dedede and Escargoon, after getting lost in the graveyard, find the haunted house. They go in to wait out the storm, and open the door, somehow unlocked. They hurry inside, and Tuff and Meta Knight get inside as well after Meta Knight throws his sword to keep the door open. Tiff notices the 'blood' is red paint and remarks how the house can't be part of the Cappy Spook-out. She hears Dedede sneeze, and spots the king and Escargoon inside the house. Tiff states that the two are most likely responsible for the house; and Tuff chimes in, saying it's also Nightmare Enterprises' fault as well. Tiff and Kirby are relived to know Tuff was able to get to them.

King Dedede and Escargoon are shown sound asleep in one of the bedrooms with Tiff, Tuff, Kirby, and Meta Knight watching. Escargoon is so tired that he wakes up, looks at Tiff and Tuff, and doesn't even acknowledge their presence before falling back asleep. Escargoon unknowingly shoves Dedede off the bed, waking him up. Dedede notices Escargoon rising off the bed on a sheet, scaring him. Dedede doesn't know Tuff and Meta Knight are making Escargoon rise and attacks him with a broom, angrily stating that the snail is "sleeping on the job". Dedede stops in horror when Escargoon stiffly uprights himself and his head spins in a circle with a creepy expression on his face. Tiff and Kirby proceed to dose them in red paint, scaring both of them. Escargoon gets trapped under a sheet, giving them the impression of a bloodstained ghost. Dedede flees from Escargoon, believing he's a ghost. Escargoon runs into the wall (knocking the sheet off of him), and runs after Dedede, with Tiff and Tuff getting a good laugh.

Dedede calls for Escargoon before a painting shudders on its own. Sharbon, the figure in the painting, comes out and blows bubbles at a very frightened Dedede. Dedede runs off, saying there's a "polterpainting", and Sharbon grins before it disappears. Escargoon is shown in a shower washing himself off, happily stating there nothing "like a warm shower to cleanse your fears and wash away your worries." Dedede then brutally attacks Escargoon, believing that he is a ghost, causing him to pull off the shower curtain and fall to the floor. Once Dedede calms down, he tells Escargoon he thought he was the ghost, and Escargoon asks him how many ghosts take showers. Dedede gets mad and tells him he was almost worried, and Escargoon hugs and thanks Dedede for being afraid for him while crying. Suddenly they hear evil snickering, and a glowing, laughing ghost bear down on them! Escargoon and Dedede are scared out of their wits and tear down the hallway, and it's revealed that the ghost is Kirby with flashlights. Tiff then compliments Kirby for scaring the two.

Dedede and Escargoon run into the basement room. After Dedede and Escargoon start crying because they think the room could be their tomb, the N.M.E. Sales Guy pops in. He explains that the haunted house is a Kirby trap with a hidden transfer disk will whisk Kirby to him. Dedede agrees to bait Kirby by pretending to suffer, and he and Escargoon laugh hard. Meanwhile, Tiff, Tuff, and Kirby hear Dedede yelling for help. They descend to the basement and find a video camera. They watch as Escargoon records Dedede running downstairs while Escargoon pleads with him. Dedede is then shown next to a door, he tells Escargoon there's nothing to be afraid of behind the door. He goes to the room, but a second later, he screams and runs into the camera. The next shot shows Dedede blocking the screen and begging Escargoon to turn the camera off because he doesn't want anyone seeing him scared. Watching the tape makes the trio wonder what scared Dedede so badly. Tiff gets Tuff to roll the part of Escargoon trying to follow Dedede ahead. As Escargoon finds Dedede standing in a corner, he screams and drops the camera.

Suddenly, what appears to be Dedede is trapped in a dungeon, chained up. Dedede says to not worry about saving him, but about saving Kirby instead. The trio decides to investigate and save Dedede. Meta Knight, however stays behind and digs a little deeper. Dedede, however, starts suffering for real as the paint begins to slide over his eyes. He is forced to close his eyes and just listen. Upon reaching the room, Tiff and Tuff are surprised at how Dedede appears normal after he annoyingly claims they took forever to come. Kirby is still determined to save him, but Meta Knight knocks Kirby out of the way with his Galaxia sword, saving him from the NME teleporter. Dedede says that he can't see if the plan worked, and the Salesman decides to send a monster to get Kirby by force. Tiff and Tuff are angry that the house was a trap, and soon Gabon appears from the teleporter. As Escargoon tries to free Dedede, Kirby attempts to handle Gabon, but his bones are too powerful for Kirby. Kirby tries to inhale a bone, but he gets no copy ability and is forced to spit it out. When all hope seems lost, Meta Knight throws Kirby a torch from the wall, turning him into Fire Kirby. He not only burns down Gabon, but the house as well.

The trio and Meta Knight escape in time, but Dedede and Escargoon are trapped. In the morning, Dedede and Escargoon emerge from the rubble and begin arguing over who's fault it was for their failed scheme. They suddenly fall asleep; they had been up all night in that house. Tiff and Tuff also find that Kirby has fallen asleep as well. 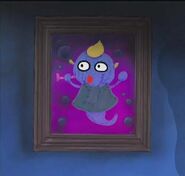 Changes in the Dub