Sawyer is an enemy in the Kirby series, debuting in Kirby 64: The Crystal Shards. It gives the Cutter Copy Ability when inhaled.

Sawyer resembles a buzz saw blade with a red eye in the center.

Sawyers have a nearly identical appearance as the Grinder enemies from Super Mario World and Super Mario Galaxy 2, and behave very similarly as well.

Sawyer will move back and forth, harming Kirby if he comes into contact with it.

In level 6-1, Big Sawyer appears as a mid-boss. It will hide underground, then pop up and try to hit Kirby. Two Bronto Burts will appear in the area for Kirby to use as ammo against it.

Certain moves, such as Needle, Spark + Spark and Stone + Needle can reach Giant Sawyer even while it's underground.

During the mid-boss fight with Vividria, she will occasionally paint Sawyer on a canvas and bring it to life. It once again grants Cutter when inhaled.

Sawyer's name is derived from the term referring to a person who saws wood. Sawyer is also an English surname, and its name could be a reference to the American fictional character Tom Sawyer. 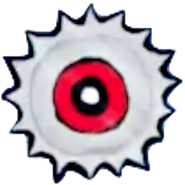