Kirby Wiki
Register
Don't have an account?
Sign In
Advertisement
in: Enemies, Characters, Articles with non-canonical information,
and 4 more
English

As an enemy in Kirby's Dream Land 3, Sasuke has smaller eyes and is noticeably more orange in color with yellow feet. Sasuke has no hands in this minor appearance, yet unlike in the anime, Sasuke's mouth is almost always visible.

In the anime, Sasuke is a short and squat foe with a dark red, spherical body and big eyes with pale purple pupils and light purple shoes. It has small round hands (usually seen while piloting its robot) and wears a conical straw hat. In most of the episode, it pilots a giant robot of Dedede. Sasuke is an expert with explosives. Sasuke has quite an attitude in the anime; it doesn't like to be bothered or insulted, as seen when it flings some small fireworks at Escargoon when it is first ordered and later when it shoots at him and Dedede while building its floats. Despite this, it is quite diligent and doesn't like being disturbed while working.

This was Sasuke's first, and thus far only appearance. It would float down using its umbrella-like straw hat and then walk in place after landing. Like in the anime, Sasuke gives the Parasol ability in this game. Sasuke's weakness lies in its speed; it floats down slowly while in the air and has a slow walking speed on the ground. This makes it an easy target to take down regardless if it is in the air or not.

In the anime, Dedede ordered it during a fireworks festival in Cappy Town. Sasuke not only is one of Nightmare Enterprises' most powerful monsters, it is also an expert with firearms and explosives. As well as a whole arsenal of ranged fireworks at its fingertips, Sasuke carries a machine pistol with it. It builds the town a towering robotic float of King Dedede which it uses to crush the Cappy's floats. The giant neon machine resembling King Dedede is outfitted with a cannon in its hammer, allowing it to shoot fireworks. Kirby inhales the fireworks from the float's hammer to become Fire Kirby. Fire Kirby fights back with some fireworks of his own, and overpowers the float from the air. When Kirby destroys the machine, Sasuke swiftly avoids the explosion the machine causes and rushes off to its secret weapon- a large rocket aimed for space. Kirby attempts to escape as Sasuke climbs the rocket to prevent him from doing so with millions of fireworks aimed at them. Kirby inhales it to obtain the Parasol ability, leaving whether Sasuke's still alive or not unknown. When the fireworks go off, Kirby floats safely to the ground using his parasol. 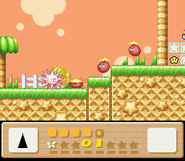 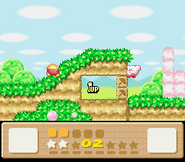 Sasuke with the pistol.