Samus Aran is the main character from the Metroid series. She was raised by the Chozo, an ancient race of bird-like people, and goes through dangerous missions throughout the galaxies, such as saving planets and bounty-hunting. She appears in Kirby's Dream Land 3 as a cameo, and is a playable character in the Super Smash Bros. series alongside Kirby.

In Kirby's Dream Land 3, Samus Aran has a cameo appearance in the second mission of the Iceberg world; she wants Kirby to exterminate a horde of Metroids in exchange for a Heart Star. The Metroids can only be defeated using the Ice ability, a reference to how they are destroyed in the Metroid games. She appears at the end of the level without her helmet.

In the Super Smash Bros. series, Samus is a starting playable character in every game. She hails from the Metroid series as the first playable character of it. She has projectile attacks such as her Charge Shot and Missiles that cover a wide range of space. 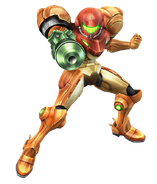 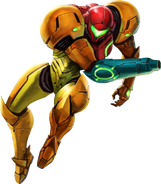 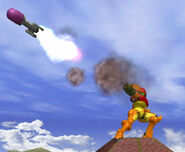 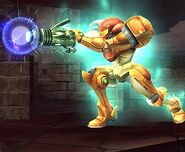 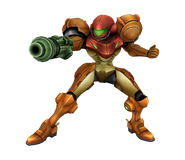