Mid-boss
Rolling Turtle is a mid-boss in Kirby's Adventure that gives the Throw ability when inhaled. Rolling Turtle essentially provided more of a challenge than other mid-bosses.

Rolling Turtle is a green turtle with boxing glove-like hands, a dark green shell that rises above its body, a black belly and buck teeth. Although he is green in most of the levels he is seen in, a magenta variation appears in the hidden Mid-Boss All-Stars in Rainbow Resort of Kirby's Adventure.

Rolling Turtle's attacks include jumping, rolling into Kirby, and throwing Rolling Turtle Jrs. When it grabs Kirby, it either spins then throws Kirby against the wall or jumps and lands on Kirby. If it rolls into Kirby, it will grab him and throw him across the screen.

A red variation appears in the hidden Mid-Boss All-Stars in Rainbow Resort. The magenta version is very aggressive and harder to defeat.

In Kirby's Adventure’s remake, Kirby: Nightmare in Dream Land, Rolling Turtle does not appear in this game and was replaced with Phan Phan for unknown reasons. 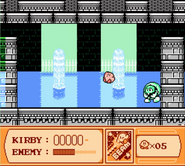 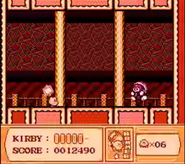