Rocky is an enemy that appears in multiple games in the Kirby series. Rockys are sentient creatures who resemble blocks of stone with two eyes, two feet, and in some games they wear twisted cords of fabric around themselves, which almost resembles Hammer Kirby's headband. Rockys are very slow. Their behavior is simple: most will take a few steps (usually four), and then try to smash Kirby. This will happen if Rocky stood on platforms above Kirby, and if he is underneath Rocky. If Kirby is near one but not underneath one, Rocky will leap towards and onto Kirby.

Rocky is a brick shaped creature made out of stone with yellow or orange feet. In most games Rocky is commonly seen being brown, however in some games such as Kirby Super Star there are also Rockys of more vivid colors such as blue and green. It is also not uncommon to see Rockys with small black eyes, with the one exception in Kirby's Dream Land 3, where Rockys have larger, more aggressive eyes. In Kirby Super Star, Rockys began appearing with blue and white headbands. While the general appearance of Rockys have changed throughout the series, since Kirby: Nightmare in Dream Land the series seems to favor the design from Kirby Super Star.

This was the first appearance of Rocky. Rocky resembles a large rock, light brown in color, with feet which allow him movement. He will try to crush Kirby the same way Kirby can crush enemies with the Stone ability: falling on him. Like Kirby, he closes his eyes tightly when attacking or "crouching". He is slightly smaller than Kirby in Stone form. In the remake, he stays the same, but he now has the cord of fabric from Kirby Super Star.

Rocky appears as an enemy in Stages 5 and 11. He either remains stationary or walks back and forth and grants Kirby the Stone ability when defeated. It is the only source of this ability outside of the Changer item.

Rocky has the same behavior as in Kirby's Adventure. He now has a blue cord of fabric wrapped snugly around his head. He resists the Cut property. Aside from being an enemy, Rocky is also the Helper for the Stone ability. He can do anything Stone Kirby can. He can also perform Stone Smash underwater. A green Rocky is playable in Helper to Hero. Rocky appears in part of the blooper reel in Kirby Super Star Ultra. When Kirby is about to break through the barrier of rocks blocking the exit at the end of the Great Cave Offensive using his Warp Star, a large Rocky is sitting on the barrier. Kirby tries to smash it, but fails and falls into the hole again.

Rocky returns in Kirby Star Allies as an enemy and friend. He acts the same as he does in previous games.

Rockys, being mainstream enemies in the series, appear in a variety of games attempting to fall on top of Kirby or by rolling down slopes at him (a tactic which was first seen in Kirby's Dream Land 2). Kirby & The Amazing Mirror introduced a new variety of Rockys (currently exclusive to the Mirror World) called Giant Rockys that have more health and must be super inhaled. Additionally, these Giant Rockys had no limbs other than arms, wore yellow construction helmets and were not as mobile as their small brethren. The only time they ever moved was to simply try and crush Kirby. They also wore constant angry expressions on their faces. Rockys in Kirby 64: The Crystal Shards have an octagon shape and wear no headband.

Rocky appears in the sub-game Kirby Curtain Call in Kirby Mass Attack. He is used to obscure the player's view of Kirby. His blue enemy palette is used in Kirby Brawlball, when Marx uses his black hole attack and sucks in enemies.

Rocky appears as a spirit in Super Smash Bros. Ultimate. The spirit battle is a timed stamina battle against a metal Kirby with super armour, and it will constantly use stone in mid-air. Once defeated, Rocky is a Novice support-type spirit with the ability instadrop.

Rocky comes from the word "rock." 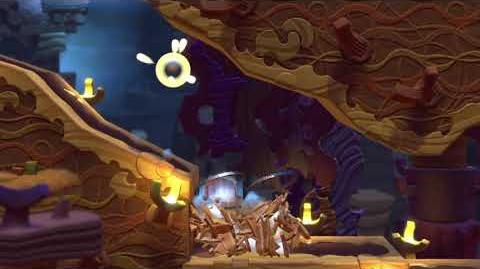 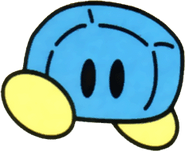 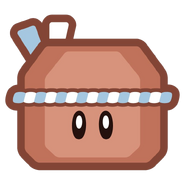 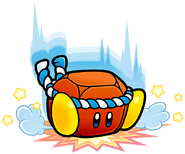 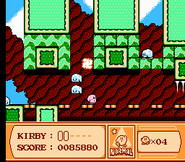 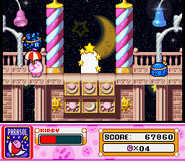 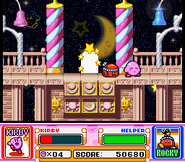 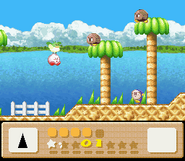 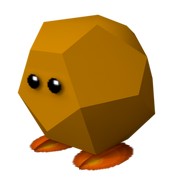 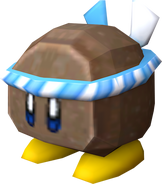 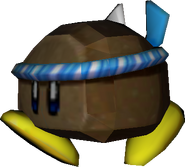