Kirby Wiki
Register
Don't have an account?
Sign In
Advertisement
in: Air Ride Machines, Air Machines, Vehicles, Kirby: Right Back at Ya!
English

The Rocket Star is composed of a seed shaped base that appears to be encased in a "jacket", complete with an exposed zipper on the top and a purple design on either side. A bulbous blue orb is located on its rear, with yellow connecting pieces around it, that expands when its rider charges the machine.

The Rocket Star is known for having the highest Boost stat in the game. Its name, design, gliding capability, and Boost stat appear to reference real world rockets.

The Rocket Star has a large blue orb located on its rear that expands as the player charges slowly (a gauge on the star will fill up as the HUD gauge does). Its Charge and Top Speed are extremely low (in fact, it is the slowest air machine in the game, moving slower than Kirby on foot). Its Glide and Turn, however, are quite good, though its Turn ability drops when it is boosting. Its other stats are balanced, and it has slightly above-average HP.

The Boost that the Rocket Star receives upon completing its charge is enormous, launching it to speeds surpassing the Formula Star, the non-legendary machine with the fastest non-Boosted Top Speed. The Rocket Star also receives a strong burst of speed from Boost Panels. The Rocket Star is able to coast off of this speed well when moving straight; however, taking a sharp turn after it has Boosted, whether from its own Charge Gauge or a Boost Panel, will greatly hamper its speed.

The Rocket Star's drafting ability is comparable to the strength of its Boost, as when the Rocket Star follows another machine's draft for a while, it will keep accelerating to ridiculously high speeds.

Its low top speed and the prevalence of quick turns in most Air Ride courses (complete with several instances in which charging is requisite) make it a difficult machine to use. However, smart usage of its Boosting power, as well as liberal use of its draft speed, will ensure that the Rocket Star stays in the competition.

The Rocket Star has made an appearance in Kirby: Canvas Curse as one of Paint Roller's paintings. The "jacket" was drawn first, then the orb.

The Rocket Star has appeared in Kirby: Right Back at Ya! as one of the Air Rider's machines. After Kirby used up all of its energy, it exploded, and he used the Winged Star. 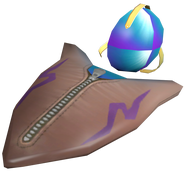