The Robot Pet is a character that appeared in the episode Kirby's Pet Peeve as a temporary playmate of Kirby's.

The Robot Pet is a small, light orange, mechanical toy dog with purple ears and a tail, and eyes similar to Kirby's, which it wears a transparent red visor over. The dog has many hidden features, like a drill, knife-like claws, and electric charges, and even a time bomb hidden inside.

While not a monster in the true sense, this cute robot puppy was a product of Nightmare Enterprises Toys. Tiff got it at Gengu's toy store as a playmate for Kirby, since he didn't have anyone his size to play with. It has a wide range of abilities, many of them dangerous like knife-like claws and the ability to electrocute anyone who touches it.

At first, Kirby is afraid of it, but they become good friends. However, King Dedede is interested in the dog and want to play with it, so he tries many times to capture it. Meanwhile, Tiff discovers its true origins and tried chasing it away to protect Kirby. The dog was set to self-destruct when Kirby was near, but it remembers how Kirby had helped it, and jumped away at the last moment. Dedede managed to catch it with his net, but the dog self-destructs on his and Escargoon's motorboat, landing them right in the water. In the end, Tiff feels bad, but at the same time is glad to know that Kirby and the dog were friends even to the end, and even Gengu knew that nothing can replace the friend that Kirby had lost.

The Robot Pet is able to use knife-like claws to slice pineapples and use a drill in its mouth to cut a hole in it, producing pineapple juice. It is also able to perform electric shocks when in crisis, such as being stolen. Finally, as its true form, it can activate a time bomb and is able to hover above water. 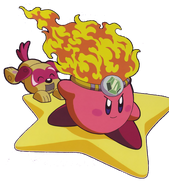 Kirby: Right Back at Ya!
Add a photo to this gallery
Retrieved from "https://kirby.fandom.com/wiki/Robot_Pet?oldid=345523"
Community content is available under CC-BY-SA unless otherwise noted.