Robobot Yourself is a photograph editor. After clicking "Get started!", the player is instructed to scroll through four possible Robobot Armor suits (normal, Fire, Jet, and Beam). Once this is selected, the next step is to upload a photo; the picture is then warped and shrunken to fit inside the cockpit. The player can further zoom the photo in or out, move it around the frame, or replace it altogether. Stickers can be added, and each can be rotated and resized. The stickers include:

Buttons below the tools and photo serve to ease the player's creation. The Back tab brings takes the picture back one step to remove the photo or bring up the suit selector (though added stickers are kept). The back arrow deletes the photo and effects; as a safeguard, it requires two clicks to be performed. Save image removes the sticker panels from the sides of the screen and adds Kirby: Planet Robobot and Nintendo 3DS logos to the upper corners of the frame.

When the player is content with his/her creation, the final button comes into play. Download allows him/her to download the finished picture. It saves itself as "Kirby-Robobot-Yourself.zip," which contains the edited image and a square version meant for use as an avatar. 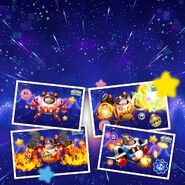 The player chooses a suit.

The player uploads a photo.

The player adds stickers to the picture.

The player finishes the picture.

The player prepares to start over. 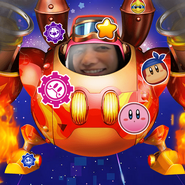