Robo Rick is a character in the Kirby series, debuting in Kirby's Toy Box.

Robo Rick is a mechanical recreation of Rick the Hamster. It is light gray with a cyan tint. The robot has red eyes, black whiskers, and exposed bolts.

Robo Rick appears exclusively in Kirby's Toy Box - Cannonball. The game is a simplified take on the concept of lobbing parabolic projectiles at opponents over hills with destructible terrain. Player 1 must fire spherical Kirbys over a large hill at his/her opponent, be it a CPU or a second player. The goal of the game is defeat the opponent Robo Rick by hitting it with enough Kirbys.

Each Robo Rick can move its head to change the direction and angle of the Kirbys it fires. They can also walk slowly forward and backward. The terrain is destructible, so the robots can blast tiny holes in it. Each machine has half of a health bar, with the other half being used as a power gauge. Every time Robo Rick is hit, it flinches and loses its lined-up shot. Passing clouds stop any Kirby that hits them, causing the projectile to lose all momentum and fall—the player(s) should avoid them for better shots.

Once one Robo Rick is defeated, the game ends with surviving robot being the winner. 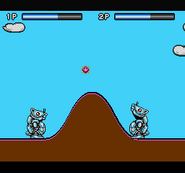 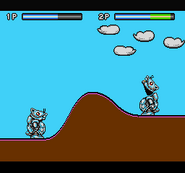 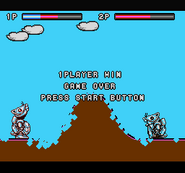 Player 1 defeats Player 2.
Add a photo to this gallery
Retrieved from "https://kirby.fandom.com/wiki/Robo_Rick?oldid=320787"
Community content is available under CC-BY-SA unless otherwise noted.