Robo Dedede is a giant mechanical construct resembling King Dedede. It appears in Kirby's Return to Dream Land as the third boss of the Scope Shot sub-game.

Robo Dedede is a robotic creation built in the likeness of King Dedede. It has pink eyes, spiked shoulders, and a jet pack.

Robo Dedede only appears in the sub-game Scope Shot. It attacks by firing floating bombs from its hammer, which is kept on its back. The player must hit the floating bombs to blow them up before they hit Kirby. The floating bombs can be eliminated entirely by destroying the pod on Robo Dedede's back that they are launched from. Doing this heavily limits the robot's attack options, allowing players to focus on offense. Robo Dedede tosses out a large, canister-shaped Time Bomb. He then spins around rapidly, moving back and forth in the distance. The player must shoot at the bomb to knock it back at the mechanical menace, whose spinning will hit it back at the player. The player must continue to knock the bomb back until Robo Dedede stops spinning, at which point it explodes on him, dizzying him and blasting him to the front of the screen, and making it very easy for players to shoot him.

When first defeated, Robo Dedede will get back up, flailing its arms wildly as it draws its hammer. Robo Dedede hammers Kirby if he does not act quickly enough. The player must shoot Robo Dedede's hammer to make it come down hard on the robot's battered head, causing a spectacular explosion. 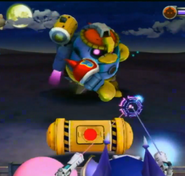 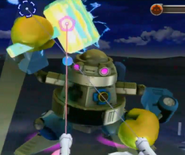 Robo Dedede goes on a rampage.

Robo Dedede destroyed
Add a photo to this gallery
Retrieved from "https://kirby.fandom.com/wiki/Robo_Dedede_(Kirby%27s_Return_to_Dream_Land)?oldid=320594"
Community content is available under CC-BY-SA unless otherwise noted.