Revenge of Meta Knight has the second-largest story in Kirby Super Star and its remake (second to Milky Way Wishes). The sub-game has a unique mechanic: a time limit in which the player must gradually damage and destroy the Halberd in the allotted time. This game requires beating Dyna Blade to unlock.

The story of Revenge of Meta Knight is fairly straightforward. Using the Battleship Halberd, Meta Knight intends to take over Dream Land and "put an end to its lazy lifestyle." Kirby attempts to stop him by trying to land on the Halberd with the Warp Star. Kirby's first attempt to board fails, as he is thrown off by Heavy Lobster (after going behind the main engine) into Orange Ocean; he returns again on the Warp Star after defeating Twin Woods, but is shot down by the Combo Cannon. Later, Kirby returns on the back of Dyna Blade, who also gets shot down by Combo Cannon, but Kirby manages to get on board. He then proceeds to destroy Combo Cannon, preventing being thrown off again.

Kirby damages both wings (to 74% damage, according to Meta Knight's co-pilot), defeats Meta Knight in a duel, and destroys the Reactor allowing the Wheelie power sources to escape, which forces the Halberd to crash-land. Everyone except Meta Knight and Sailor Waddle Dee abandon the Halberd before it crashes. Meta Knight then attempts to prevent Kirby from leaving the ship by chasing him, using various attacks. By riding a Wheelie Helper, Kirby makes a final leap, flying off the Halberd. The credits roll as Kirby and the Wheelie watch the Halberd crash into the Orange Ocean, and then ride away in the sunset. The game ends with a credit showing the Helpers and Copy Abilities in the game. 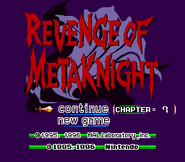 Title screen in Kirby Super Star
Add a photo to this gallery
Retrieved from "https://kirby.fandom.com/wiki/Revenge_of_Meta_Knight?oldid=321875"
Community content is available under CC-BY-SA unless otherwise noted.