Bang-Bang, Bouncy, Bronto Burt, Como, Waddle Dee, Waddle Doo, Wheelie
Ravine Road is a stage in Kirby: Canvas Curse. It is Reddy Land's third and last stage. It is the third stage in the game, coming after Tiny Town and before Ghost Grounds.

Ravine Road is a harsh, unforgiving jungle that came about when Drawcia turned Dream Land into a world of paint. The sun is perpetually setting here. The jungle is very overgrown and hides away a wide array of wildlife and insects in its bramble-filled grasses. The overall terrain here is also very mountainous, but is still ideal for adventuring. Along with the advanced terrain, water spouting from the canyon walls obstruct the player's view. There are dangerous pits here. But large currents of wind blow up from them, making them impossible to fall down into.

For the first part of the stage, all Kirby has to do is go east. There are pits, but wind emerges from them, so Kirby will never be KO'd by falling. The second part makes Kirby do the same thing again only near the end Kirby has to press some switches to open barriers. Kirby can simply ride the wind and make it to the other side without pressing any buttons. The third part of the stage is where it slightly differs. First, Kirby has to break through some bubble blocks. At the bottom, once the Magical Paintbrush breaks the Bomb Block, Kirby can grab the Wheel ability and just dash through the stage. No wind exits the pits, but there are tons of springs everywhere that will bounce Kirby to the next platform. Near the end is a fork. The lower path lets Kirby grab a medal. The upper path has nothing special. After going through either of the paths, Kirby can leave the stage.

It is comparable to Canvas Canyon.

When played with the Old School music option on, Ravine Road's theme changes to Vegetable Valley's theme from Kirby: Nightmare in Dream Land. 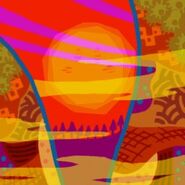 The beautiful view above the canyon.

Needle Kirby making his way through the jungle.

Ravine Road's waterfalls.
Add a photo to this gallery
Retrieved from "https://kirby.fandom.com/wiki/Ravine_Road?oldid=313528"
Community content is available under CC-BY-SA unless otherwise noted.