Kirby Wiki
Register
Don't have an account?
Sign In
Advertisement
in: Articles under construction, Stubs, Copy Ability, Copy Abilities in Kirby and the Forgotten Land
English

A red-colored pith helmet with dark brown and beige straps and a purple star-shaped head light with a bright yellow bulb at the front.

Kirby wields a small pink blunderbuss with a dirty gold-colored muzzle, a red interior and an emblem of a purple star in an orange circle on its sides.

Ranger is a Copy Ability in the Kirby series, debuting in Kirby and the Forgotten Land.

Kirby wields a blunderbuss that he can blast enemies or targets with star-shaped bullets at various distances. It can be charged up for a strong, long-range attack that can be aimed and provides a target reticle to get a precise shot. The head light on the hat emits a short stream of light in front of Kirby, providing a small additional amount of visibility in the dark.

Noble Ranger is the first evolution, allowing Kirby to wield two firearms at a time, increasing his fire rate. His ability hat takes the shape of an orange and gray tricorn hat; the ability hat also has an outward tan layer, including an attachment of what appears to be yellow feathers. Attached to his hat are two star-shaped emblems, with one of them upside-down. His weapons appear to be made of wood and steel, with patterns based on wheat plants. The ends of his weapons appear busted out, but they are still functional. Charging up will shoot out a powerful flurry of projectiles, using both weapons repeatedly and causing confetti to shoot out.

Space Ranger is the second evolution, Kirby's ability hat becomes a full-on bright-blue astronaut suit, which also has an antenna and oxygen pack. A part of the suit that reveals Kirby's face is a visor displaying some sort of HUD. He wields a singular ray gun which shoots out electric projectiles, that when fully charged up will create a big electric field that damages enemies.

Space Ranger, the second and final evolution of Ranger 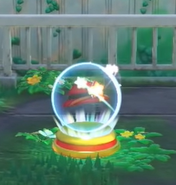 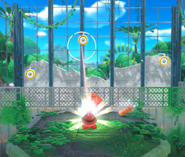 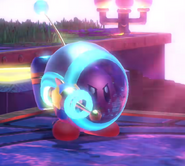 Space Ranger Kirby about to shoot with his blaster.