The Rainbow Sword is a weapon created by collecting all the Rainbow Drops. Kirby's Dream Land 2 manga
Add a photo to this gallery 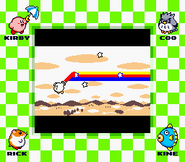