Seeing one of the resort's titular rainbows, Kirby treats it as a music staff and uses Mike to put music notes on it. However, this causes the rainbow to become unstable and fall apart. Luckily, Kirby pulls his parasol out just in time to avoid being hit by the falling notes.

This intro is the same in both versions of the game, but in Kirby's Adventure, the opening took place on the ground at day instead of in space.

Rainbow Resort is an icy area located in the far reaches of Orange Ocean. It is a relaxing and calming area that is often visited by King Dedede. Situated far from other continents and near space, Rainbow Resort is eternally covered in ice and frost. Having nearly no atmosphere, Kirby can see the many stars and nebulas that exist in Rainbow Resort's vicinity, even so far as to see the rest of Gamble Galaxy far in the distance.

Located in Stage 2 of Rainbow Resort is a large tower that holds many different mid-bosses that Kirby must fight.

The first set is:

The second, hidden, set is:

The hidden series of bosses are accessible through a hidden door above the main entrance, and are more difficult to fight. The door is more easily noticed in Kirby: Nightmare in Dream Land as it is replaced by a ventilation duct opening. A similar secret appears in Stage 5 of Nutty Noon in Kirby's Return to Dream Land, again with similar functions.

The final stage of Rainbow Resort is a homage to Kirby's Dream Land, and has a black-and-white environment that illustrates each level of the game. The boss of Rainbow Resort is King Dedede, who intends to stop Kirby from fulfilling his goal of reaching the Fountain of Dreams.

Despite being the final level, Rainbow Resort is rather sparse with sub-games. It has a total of six stages, but only has a Crane Fever room (replaced by a Bomb Rally Room in the remake). 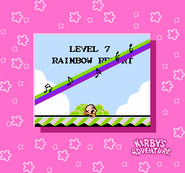 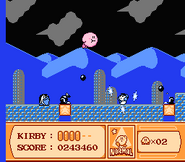 Bombers are some of the most common enemies here.

Traveling in through the level with the moon in the background

Aurora can be seen from the frozen Rainbow Resort.

A view over the frozen landscape