The Raft is a vehicle in the Kirby series, debuting in Kirby 64: The Crystal Shards.

In Kirby 64: The Crystal Shards, the Raft is a rectangular vessel made from smooth planks of wood. Its sides are raised. In Kirby Tilt 'n' Tumble, it is a flat vessel made of four logs that are held together with rope bonds. The logs have rough bark.

The Raft appears exclusively in Stage 2 of Aqua Star. After defeating a giant Kany Room Guarder, Kirby finds a river where Waddle Dee waits for him in a Raft. Kirby jumps in and the two ride the rapids. The Raft defeats any enemy it hits without damaging its passengers. Pressing A causes the vessel to jump, enabling Kirby to collect items and dodge bricks in the water. If the Raft hits a brick, flips over it and continues down the stream, leaving Kirby with one point of damage.

At the end of the sequence, Kirby and Waddle Dee panic before going over a great waterfall, which launches them out of the Raft and separates them.

The Raft operates identically to the Mine Cart in Stage 2 of Neo Star and the toboggan in Stage 1 of Shiver Star.

The Raft appears exclusively in Stage 3 of Level 3. The stage is filled with water; Kirby drowns after spending three seconds in the water, so using the Raft to travel is vital. When he is riding the vessel, the player controls Kirby as usual, by tilting the Game Boy Color. Kirby can jump out by jumping like he normally would, abruptly tilting the system upward. Pressing A grants the Raft a brief burst of speed and invincibility frames, enabling him to defeat Squishys that emerge from the water.

When hit by an enemy, Kirby launches out of the Raft and into the water. He must quickly get back on the vessel or find land to survive. Kirby cannot take the Raft on land. 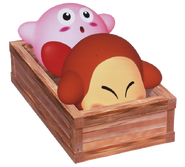 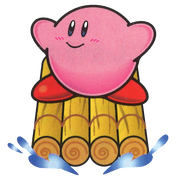 Kirby and Waddle Dee jump over a brick.

Kirby and Waddle Dee fall out of the Raft.