Quick Draw is a sub-game from the original Kirby's Adventure. Samurai Kirby is a similar game that appears in later games.

Quick Draw is a cowboy-themed, reflex-based sub-game in which Kirby must shoot his opponents before they get the chance to shoot him. The player has to press the "A" button as quickly as possible when the word "Fire" appears on screen (though pressing the "A" button before the word "Fire" is displayed will result in a strike). The characters here don't use real guns, but instead a boxing glove is launched from these guns that knocks the opponent out of the screen (though for Kirby, he just simply gets knocked unconscious and launched back a little), dropping their hats. As the opponents progress, Kirby must resort to bigger guns, a gag that would be remixed in Samurai Kirby.

Instant Look Slash Reform
刹那 = Instant, 見 = Look, 斬り = Slash, 改 = Reform
In Kirby: Nightmare in Dream Land, the Quick Draw sub-game from Kirby's Adventure plays as a version of Samurai Kirby. Kirby fights against the same enemies like he does in Samurai Kirby, but this time he only uses the fan as his weapon. A new addition is that there is an option of a competitive multiplayer mode, which can allow for up to 4 players. In the English version, this game retained Quick Draw's name from the NES game, however, the Japanese name shows that this is a version of Samurai Kirby. 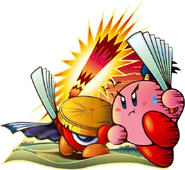 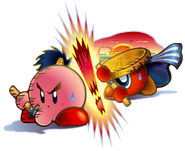