Unknown, but resembles a wasp

Queen Sectonia (クィン・セクトニア) is the main antagonist (tertiary in Extra Mode behind Black Dedede and Dark Meta Knight) and final boss of Kirby: Triple Deluxe. She is a large queen bee-like creature that wields two magic scepters, and appears to be the mastermind behind the creation of Royal Road, the abduction and of Floarald's inhabitants, and even (indirectly) Dedede's abduction by Daranza early in the game. She attempted to take over Floarald and Pop Star, but was thwarted by Kirby.

Sectonia has the look of a giant wasp, although instead of being black and yellow, most of her body appears to be a dark blue or violet, but the three stripes on her lower body are yellow. Her head is mostly dark blue, but there is a yellow area that appears to form her mouth and nose. She has large pink eyelashes and antennae, while her large insect-like eyes are purple. She wears a gold crown with a blue crystal-like object on it and a pink heart on the front. She wears what appears to be a regal pink and purple cape with a fluffy white collar, and red and blue hearts attached to it on her large, dark blue upper body and her upper body has a pink heart on it. The area of her body that appears to be her waist is extremely thin, but her lower body (what could be a thorax) is as big as her upper body. Her four wings are also very wasp-like; they are a golden yellow, and have gate-like holes in them. She has a tall golden staff topped with a dark pink, diamond-shaped crystal. When in battle, she carries a second staff, colored silver and topped off with two jagged pincers with a green, round jewel in between them. She is also able to transform her staves into a pair of silver rapiers with red jewels embedded into their hilts. Sectonia has white-gloved hands, but she is limbless, meaning she has no arms attached to them. 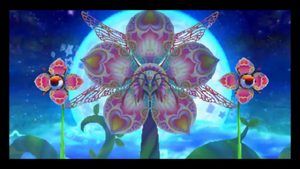 Her second form is a giant flower-like monster. Her five petals are bright pink with heart-shaped splashes of orange on the ends and blue surrounding the orange, and pink and purple designs closer to the flower's base. Sectonia's second form is similar to her first one, but the flower seems to replace her lower body, and her antennae are much longer. Her wings now float behind her flower body. She controls green vines in this form, that turn pink at the tips and have flowers on their ends that resemble her own flower form, except with four petals instead of five. The flowers have large black pupilled eyeballs in their center.

After Kirby defeats King Dedede, who is being controlled by Daranza, at Royal Road, Daranza decides that Kirby may be strong enough to best his master, whom he promptly summons from the ceiling. Said 'master' turns out to be none othet than Sectonia, who immediately blasts Daranza with her scepter while calling him a foolish bug. Queen Sectonia promptly declares herself to be Popstar's new goddess, and attacks Kirby for his 'insolence', but is defeated. As he celebrates, Sectonia combines herself with the World Tree and turns into a flower-like monster. Vines encase the castle Kirby and Dedede are in, trapping them, and cover Pop Star and Floarald. Several Floarald inhabitants appear and provide Kirby with a cannon-like device, which he and Dedede use to combat Sectonia's vines. Once an opening in the vines is made, Dedede shoots Kirby through it, and the latter ascends the World Tree to confront Sectonia. She is defeated once more, and Kirby again celebrates, but once of Sectonia's vines grab Kirby by the foot and capture him. Just then, Daranza appears with Dedede in his hands, and throws the king at Kirby, using his hammer to smack Kirby free of the vines. Dedede then throws Kirby at Daranza, who throws a Hypernova Bean at Kirby, giving him his Hypernova ability. Kirby then confronts Sectonia again. The buds on Sectonia's vines protect her with a shield, but Kirby inhales them and shoots them at one another until all four are destroyed. Sectonia makes a last-ditch attempt to defeat Kirby by firing an enormous beam at him, but Kirby inhales it and sends it back at Sectonia, seemingly destroying her and ending the main mode.

After defeating every other opponent, Kirby discovers that Sectonia had not been slain during her 'final' battle against him: instead, she had clung to life long enough for her vines to find four Hypernova Beans, which a decaying Sectonia promptly consumes. Sectonia then transforms into a blue, orchid-esque form of herself known as Queen Sectonia's Soul and fights Kirby as the penultimate battle of the True Arena. Sectonia's Soul is seemingly defeated after having her HP depleted, but she then stirs and rips herself out of the wilting World Tree, engaging Kirby in a surprise final battle. When the final blow is dealt, Sectonia screams and explodes into a shower of blue petals, ending her aspiration for godhood permanently.

The first fight against Sectonia is divided into three distinct phases. In the first one, she attacks with relatively weak beams from her green scepter, and will occasionally exchange her scepters for swords to perform melee attacks. One melee attack involves Sectonia slicing her swords twice, and then charging forward in a similar fashion to Galacta Knight, leaving a trail of stars behind her; another is a multi-stab attack similar to the one Kirby himself uses that launches Kirby at the end of the attack if he is caught in it.  After a third of her health is gone, Sectonia will warp to the middle of the screen and produce a huge crystal in the background with her magic; she will then use her magic to throw Kirby onto the crystal, starting phase two. Here, Sectonia will initially attack from the background with yellow discs which are thrown in a sharp arc: Sectonia will first fire two sets of two discs, and then will fire a single, 6-disc set which will cover the whole floor of the crystal. Sectonia can also warp closer to the crystal and create smaller, ant-like minions to distract Kirby while she uses other attacks, and use powerful dark lightning attacks, swiftly repositioning herself after every strike. Finally, Sectonia retains her sword attacks from her first phase, which can potentially knock Kirby off the platform if he is struck by them. When another third of her health is gone, Sectonia will use her scepters to shatter the crystal, blasting Kirby back to the first battle arena for the final phase of the fight.

Sectonia's main attack here is to rapidly teleport towards the front of the screen, leaving after images behind her, before appearing next to Kirby and quickly slicing her swords: she tends to do this several times in a row. She retains the ability to summon minions, and often follows up on this by shooting several huge, damaging discs at Kirby's height.

The final battle in normal mode pits Hypernova Kirby against Queen Sectonia and her four vines. Sectonia's main attack in this form is having one of the vines fire out a huge stream of coconut-esque missiles that Kirby must inhale, creating a large clump of bombs. Sectonia will then fire a much larger missile that  will slowly approach Kirby: the hero must spit the bomb clump at the larger bomb, forcing it back and detonating it at a much safer distance. Sectonia's other attack is to send one of the flowers from her vines to try to swallow and damage Kirby: if Kirby evades this attack, which is done twice in a row as Sectonia's health gets lower, the flower is stunned and Kirby can inhale it to use it against Sectonia. Sectonia will use her remaining flowers to form a shield around herself: Kirby's aim must be adjusted with the gyroscope so that the flower rams into one of the other three, destroying it and removing a huge chunk of Sectonia's health bar.

After being struck by three of her own flowers and having all four destroyed in the process, Sectonia will utter a violent roar, rush to the left side of the screen, and emit a large laser beam in one last attempt to defeat Kirby. The d-pad must be quickly rotated during this to make Kirby inhale the beam: if successful, Kirby will also inhale Sectonia's petals, most of the platform he is standing on, and even Sectonia's health bar before sending it back at Sectonia, defeating her, ending the main mode and making the way for Sectonia Soul to appear at the end of the True Arena.

Sectonia attacks in a similar style to Marx Soul and Drawcia Soul, on that she changes into things, like a huge fireball or blobs of paint, and tries hit Kirby directly. She can summon vines from any edge of the screen that will attempt to jam at Kirby. 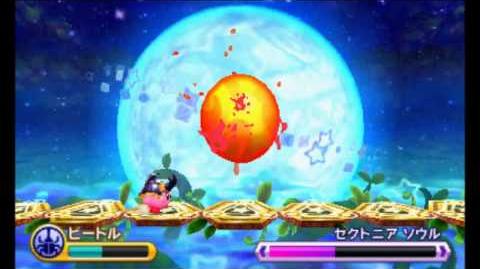 Sectonia jabbing at Kirby with her swords 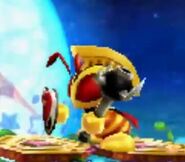 Sectonia DX summons a crystal halfway through the battle, just like in Queen Sectonia's first battle

Sectonia Soul occasionally turns into a ball of fire

Sectonia Soul occasionally turns into a ball of paint

Sectonia Soul's paint attack, where she rains down blobs of paint with her own face on them

Sectonia explodes in a shower of blue petals after her sixth and final defeat
Add a photo to this gallery
Retrieved from "https://kirby.fandom.com/wiki/Queen_Sectonia?oldid=174671"
Community content is available under CC-BY-SA unless otherwise noted.