Quadgun is a mid-boss in the Kirby series, debuting in Kirby Mass Attack.

Quadgun is a massive tank-like machine, sporting four guns on its face, hence its name. It has four eyes, each in a different color (blue, green, yellow, and red). It only opens one eye at a time, opening them as they are progressively destroyed. It has a conveyor belt on the front, on which buttons and cannons move along. Quadgun is situated on treads with five large wheels. It has three smokestacks extending from its back and a toothy grin painted on its side.

Quadgun appears exclusively in Stage 2 of Volcano Valley. It ambushes the Kirbys' tank at the end of the stage, positioning itself on the left side of the screen.

Quadgun's conveyor belt is adorned with buttons and cannons. The cannons fire homing missiles that damage the tank if they are not shot out of the air. The player must fire a Kirby at the colorful button to damage Quadgun while avoiding the black buttons marked with skulls; if those are pressed, Quadgun rotates out a full wall of four cannons that fire on the tank. Cannons can be destroyed with two shots to make the battle easier, though this does not damage the mid-boss. After hitting two buttons of one color, the corresponding eye explodes and another opens. This increases the speed of the conveyor belt as well as the numbers of hazards on it.

After destroying the first three eyes, Quadgun engages its third phase: It retreats and then rushes forward with three empty slots replacing the conveyor belt. These extend three large buttons, one red and two black with skulls; both types are pressed with three shots due to their size. The mid-boss withdraws them quickly and frequently, switching their positions. Like before, the player must press the colorful button twice. Pressing a black button causes Quadgun to drive forward and bump the Kirbys' tank, damaging it. If the player delays too long, the mid-boss briefly replaces the buttons with cannons that fire simultaneously.

With all four eyes destroyed, Quadgun falls apart and explodes, revealing the Exit Door on its base.

Quadgun tries to ram the Kirbys. 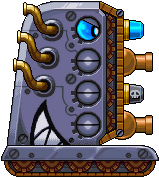 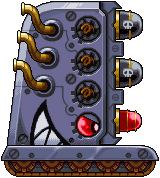