Kirby Wiki
Register
Don't have an account?
Sign In
Advertisement
in: Enemies, Characters, Articles with non-canonical information,
and 10 more
English

Pyribbit is a boss in the Kirby series, debuting in the game Kirby: Triple Deluxe. He is fought in Stage 6 of Endless Explosions, and holds a Grand Sun Stone.

Pyribbit is an orange frog with a round, fat belly sporting a splash of light orange under his mouth like a bib. His lips are also orange and very large, and he has a curly orange and blue moustache above them. Above his mustache is his angry gleaming eyes with blue pupils, curly eyebrows, and his face area around his eyes is almost completely brown. On his head, he sports a brown crown-like jeweled crest on his head with a flame in the center, resembling a fire pit. He has two small webbed flat feet, and a medium sized tail on his back.

Pyribbit DX has a green body with some yellow at the top, a fire-shaped splash of orange on his chest, green eyes, and a dark red moustache.

Pyribbit EX, a form that is exclusive to Super Kirby Clash, greatly resembles to his DX variant, albeit with a larger crown.

Pyribbit debuts in Kirby: Triple Deluxe, serving as the boss of Endless Explosions. Before the main story mode battle with Pyribbit starts, Taranza can be seen flying to Pyribbit's home while carrying King Dedede in a net. Kirby pursuits the enemy and finds Taranza levitating in front of a sleeping Pyribbit. The villain proceeds to grab a rock and launch it at the sleeping frog, and then quickly fly away before Pyribbit can notice. With Kirby being the only one present at the scene, and the rock having bounced off the fiery frog and into Kirby's hands, Pyribbit immediately assumes the pink hero is the one responsible and attacks him.

In Dededetour, King Dedede rushes across the terrain and trips, accidentally letting go of his hammer, which hits a sleeping Pyribbit DX. Taking this as an act of aggression, Pyribbit DX attacks him.

During the battle, Pyribbit will occasionally hop onto the stones in the background, and even sometimes sink underneath the magma sea surrounding them. He then quickly jumps back onto the foreground platform in an attempt to confuse the player. Then, he will do small, short range skips with small flames underneath his belly near his feet. When he reaches the middle of the platform, he does two fire spin attacks, one that is mid range and another that is long range. He then hops into the magma, completely disappearing from the view of the player for about a second. He will then pop his head in and out of the magma a few times before showing up in front of the platform and attempt to grab Kirby with his tongue. If Kirby is grabbed, he will go into Pyribbit's mouth. Kirby will be slightly damaged and Pyribbit will jump onto one of the stones, and then spit Kirby out, dealing significant damage overall. Next, Pyribbit will then hop back and forth from the stones in the background, shooting giant magma balls out of his crest. After repeating this a few times, he will then jump extremely high up in the air and land in the foreground, almost flattening himself. He can also rapidly bounce back and forth from the background to the foreground across the screen.

Pyribbit will repeat all of the above until the player manages to beat him down to half of his health. After this occurs, the first thing Pyribbit will do is summon a giant volcano in the background, and four rocks within its range as well. He then hops onto the aforementioned volcano and summons giant lava pillars and directs them to charge towards the foreground. Kirby must either stand in front of the gap they leave or fly above them to avoid taking damage. After this, Pyribbit uses all of his previous attacks with some minor upgrades, shoots his magma balls more often, and spits flames out of his mouth in two different ways, one where it is in a straight line and another where he rapidly spins while he blasts, temporarily smudging the screen which disrupts the player's view. Pyribbit can also hop into his volcano and summon five volcanic rocks to rain down on the player. Four of these rocks will fall in a certain pattern while the last one is not a rock at all, but Pyribbit himself. After that, he will spew a fountain of lava from the fire pit on his head, and and spin around while moving left and right.

Pyribbit attempts to catch Kirby with his tongue.

Pyribbit spits a jet of flame.

In Dededetour, Pyribbit DX's attacks are mostly the same, but some of them are strengthened. In the first half of the battle, his only updated attack is when he shoots out a magma ball, he shoots two of them instead of one.

When he is down to half health, Pyribbit DX attacks using the lava pillars once again, but this time they will go underneath the magma and then quickly spring up when they reach the foreground. The player must stand in front of the gap they make and stand there until the pillars leave the foreground. After that has happened two times, the magma pillars will sway from side to side while charging at the player, which means the player must move the character from side to side to stay in the gap if they do not want to take damage. Pyribbit DX also now shoots four magma balls instead of two, and when they reach the ground they will explode, leaving small pools of fire that disappear after a few seconds, but these harm the player if he/she decides to step on them. Pyribbit DX also does his spinning fire blast attack while in the background and shoots it at the player, effectively avoiding damage while still smudging the screen at the same time. Pyribbit DX's bouncing attack is now longer and more disorienting; not only does he hop from the stones in the magma, but the top stones as well. When he lands after being shot from the volcano in the background, two lava pillars charge towards the foreground. Pyribbit DX can also spray a fountain of lava out of his crest and waddle from side to side. The lava reaches halfway between him and the edge of the screen on both sides of him. Kirby/King Dedede must stay next to him to avoid this, especially when he spins around in a full circle.

While Pyribbit does not appear in the main game of Kirby: Planet Robobot, he appears as the boss of the fourth quest in the Team Kirby Clash sub-game.

Pyribbit is first fought in the Volcano after being unlocked for 30 Gem Apples. He is an Ordeal boss in the Tough category and must be defeated before the player can access the Empyrean. He uses his attacks from Team Kirby Clash.

Pyribbit is later fought again in the Volcano after being unlocked for 39 Gem Apples. Here he is in the Tougher boss category, and must be defeated before the player can access Landia EX in the Decisive Battlefield. Pyribbit does not gain new moves, though his moveset is altered to catch the player off-guard, attack faster, and hit more areas on the screen.

Pyribbit's name is a portmanteau of the prefix pyro- (related to fire) and ribbit, an onomatopoeia for the sound frogs make.

His Japanese name, ヴォルゲロム (Vorugeromu), is a portmanteau of volcano, ヴォルケーノ (Vorukēno); and the Japanese onomatopoeia for a the sound a frog makes, and ゲロゲロ (Gerogero); with a ム (mu) suffix. Pyribbit roars atop the volcano. 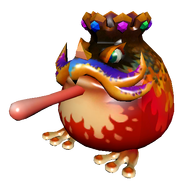