Purple Kirby is a member of the Kirby species that appears in the Kirby series, debuting in Kirby Air Ride. 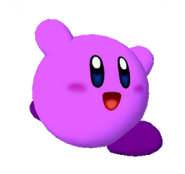