Large enemy
Puppet Dee is a large enemy in the Kirby series, debuting in Kirby's Return to Dream Land. It yields no Copy Ability when inhaled.

Puppet Dee is composed of a group of three Waddle Dees inside a large, shabby paper maché Waddle Dee.

When the paper maché covering is destroyed, the three Waddle Dees fly out in random directions, which can be dangerous in some situations. Kirby can defeat each Waddle Dee individually or inhale the whole thing in one using a Super Inhale. Additionally, if he has the Ice Ability, he can defeat the maché without releasing the Waddle Dees within.

Puppet Dee returns in Kirby Star Allies. In this game, they function just as they did in their previous appearances, though the paper maché covering is now more shabby from a visual standpoint, such as with more visible edges of colored paper and various creases. Also, depending on what Friend Ability either Kirby or his friends have, all three Waddle Dees in the covering can be defeated instantly.

Puppet Dee appears in the game's boss rush mode, The Ultimate Choice, as a part of Mid-Boss All-Stars #1. It appears in three levels of difficulty (Sweet Breeze, Spicy Adventure and Sizzling Threat). 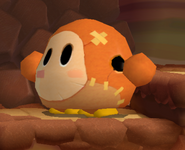