Punc is an enemy that appears in Kirby 64: The Crystal Shards. It resembles Togezo with orange shoes and a green shell with just three yellow spines running down its back. Punc attacks much like the Togezo in Kirby's Adventure and Needlous in other games, occasionally curling itself into a ball and rolling around. It gives the Needle ability when inhaled.

Punc is a black, ball-shaped creature. It has two small, yellow-orange feet and beady white eyes. Punc has a green helmet-like shell that is made up of three segments. Each segment has a short, yellow spike on it. Punc bears a striking resemblance to Togezo.

Punc normally walks around a given area, pausing only to turn around when it reaches a ledge. When Kirby draws near, however, Punc's segmented shell will fold down to cover the enemy's body, and Punc will quickly roll around in an attempt to hit Kirby. This attack pattern is identical to that of Togezo.

Punc's name is derived from the word "puncture," referring to the enemy's pointy spikes. It might also reference the word "punk," which describes its hooded appearance resembling those following the punk cultures in several countries, or its "mohawk" of spikes. 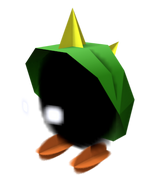 Kirby 64: The Crystal Shards
Add a photo to this gallery
Retrieved from "https://kirby.fandom.com/wiki/Punc?oldid=324189"
Community content is available under CC-BY-SA unless otherwise noted.