Pump Up D and Power Down E are a pair of items seen in Kirby: Right Back at Ya!. They are two energy drinks are seen exclusively in the episode Power Ploy.

Pump Up D and Power Down E

Pump Up D is a drink named after King Dedede that makes the drinker stronger. When drunk, the drinker's muscles bulge as they become strong and buff, and they move faster than normal. The effects don't last long, though, and eventually the drinkers will tire themselves out after exercising rigorously. This drink can also be mixed with Chef Kawasaki's food to create his Stamina Stew. Kirby ate some of Kawasaki's Stamina Stew twice during the episode; the first time, he ran rampant through Cappy Town and the forest, and even inhaled a stone Dedede bust to become Stone Kirby. The second time, Kirby used its strength-boosting effects to overpower and defeat Red Viper. 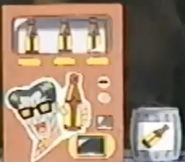 Vending machine
Add a photo to this gallery

Pump Up D and Power Down E

Power Down E is a drink named after Escargoon that makes the drinker weaker. When drunk, the drinker becomes exhausted and lays around, giving the opposite effect of Pump Up D. This drink left Kirby vulnerable to Red Viper before he ate his second helping of Kawasaki's Stamina Stew, which made him stronger and faster again.

Vending machine
Add a photo to this gallery

Retrieved from "https://kirby.fandom.com/wiki/Pump_Up_D_and_Power_Down_E?oldid=326394"
Community content is available under CC-BY-SA unless otherwise noted.