Propeller is a small flying creature that is shaped like a raindrop with a silver propeller on the top of its head, as its name implies. It normally appears with a simplistic smiling expression, which changes to a sinister expression when Kirby approaches, depending on the circumstances. Throughout the series, it has been portrayed with multiple different colors, such as blue (the most common color), gray, red, yellow, brown, and green (only seen in its artwork in Kirby's Dream Land 2).

If Kirby approaches a Propeller Bomb with the company of an Animal Friend, the Propeller becomes angry and chases him. If it touches Kirby outside of invincibility frames, it will self-destruct, causing Kirby to instantly lose his Animal Friend. However, if it chases Kirby for a prolonged period of time, it stops and flies frontward off-screen. It will also explode on its own if it is hit with enough projectiles. Most attacks don't do much to Propeller Bomb in its angry state, but Ice will freeze it instantly, making it a useful ability to use when trying to keep an Animal Friend.

Propeller appears as an enemy in Stage 10 and Castle Dedede. It remains in one place and drops a Changer item when defeated. It appears in its happy form until Kirby hits it, which causes it to become angry for a few seconds before it is defeated.

In Kirby's Dream Land 3, Propellers are much different than in past games. They hatch from eggs, can be inhaled, and come in different colors: yellow, blue, brown, black, and red. They will chase Kirby or Gooey by default, but they will do so at very high speeds if an Animal Friend that matches their color is around. Yellow will speed up at Rick, Blue at Kine, Brown at Nago, Black at Coo and Pink at ChuChu. Interestingly, none of the Propeller variants react differently to Pitch. Additionally, after they have chased for an extended period of time, they fly upwards out of view rather than forward as it did in Kirby's Dream Land 2.

In Kirby 64: The Crystal Shards, the Propeller changes almost entirely. Its color is a darkish purple, and on its face is a happy expression, which doesn't change. In this game, it no longer hatches from eggs. If Kirby has a Copy Ability, it will chase him when he approaches. Otherwise, it will float in place. If Kirby inhales a Propeller and holds it above his head, it will fly up for a bit, and then pop. The Propeller now gives the Ice ability when inhaled.

Propeller makes a reappearance in Kirby: Planet Robobot, now being a robot due to the mechanization by the Haltmann Works Company. It retains its behavior from Kirby's Dream Land 2, waiting for Kirby to draw near before becoming angry and beginning to chase him, regardless of whether or not he has a Copy Ability. Some also wait in the background and fly over to the foreground as Kirby approaches. Propeller no longer yields a Copy Ability when inhaled in this game for the first time since Kirby's Dream Land 3. A bigger variant of Propeller, fittingly called Big Propeller, also appears.

Propellers return in Kirby Star Allies. Their design was changed back to a much more simplistic, non-mechanized one, now blue with white propellers. They retain their behavior from past games, waiting in one place before Kirby draws near, and chasing after him with an angry expression when he does. It explodes upon contact. 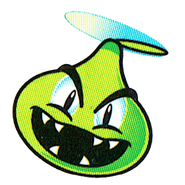 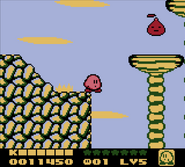 Kirby's Dream Land 3, a Propeller in its egg. 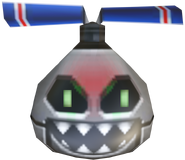 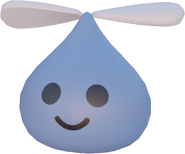