Princess Marona is a character in the Kirby series. She appears in the Kirby of the Stars: Meta Knight and the Apostle Princess novel.

Princess Marona is a anthropomorphic maltese puppy with cream fur, a pair of twin drills, rosy cheeks, a stubby pink nose, and blue eyes with two eyelashes on each. She wears a golden crown with a red gemstone and a pink bow, a red shoulder warmer with white frills of wool and a pink and yellow striped dress with the same frills on the bottom.

Princess Marona is one of the main characters of Meta Knight and the Apostle Princess. Princess of Chiffon Star and daughter of Merengue XIII, she as been kidnapped and manipulated by Baron Gallic to steal the national treasure recipe book of her planet, and after discovering this, Meta Knight sets off to rescue her.

When her mother was alive, Marona was a lazy person with a silly personality and a big appetite for sweets, but since her mother died, many people on the planet wanted her to be a more serious and responsible person like her mother, including her father. Therefore she tried to assume the expectations of the kingdom and pretended to be a person of honor and elegance. According to the book, her pink bow used to belong to her mother.

In the second half of the story, when Meta Knight manages to find the princess, she didn't want to go with him, as she didn't want to go back to the narrow life of the castle that was imposed on her by the kingdom, so she destroyed the Royal Cake Factory with the intention of being neglected by her father. Meta Knight thus discovers that all the things she did were of her own will and that she was under the control of Baron Gallic on her own initiative. However, she then learns of her father's murder plan and so decides to return to the castle with Meta Knight, after a fight with the baron himself. After solving the case, she reconciled with her father and started showing her usual personality again. 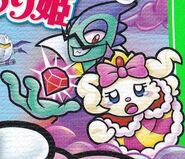 Princess Marona and Baron Gallic on the novel's cover art.

Add a photo to this gallery
Retrieved from "https://kirby.fandom.com/wiki/Princess_Marona?oldid=345207"
Community content is available under CC-BY-SA unless otherwise noted.