Kirby Wiki
Register
Don't have an account?
Sign In
Advertisement
in: Characters, Articles with non-canonical information, Bosses,
and 12 more
English

Unknown, but same as Susie

President Haltmann is a character in the Kirby series that serves as the main antagonist of Kirby: Planet Robobot and CEO of the Haltmann Works Company.

President Haltmann is fairly large and egg-shaped, with pale skin as well as disembodied hands and feet. He has solid cyan eyes, a prominent brow, purple hair, and a mustache. He wears a dark indigo suit with a maroon tie and a pink collar. He also sports a small golden radio piece on the side of his head and a set of lilac gloves. His gloves and body are adorned with gold-encrusted rubies.

President Haltmann's Executive suit is a gold mech with lilac and red gems encrusted within and indigo designs at the wrists. It also has a pink jewel on the bottom. His 2.0 Executive suit has a stripe of black going around near the top and on the wrists with all of its gems white rather than lilac or red.

When not piloting his mech, President Haltmann sits on his hovering golden chair, which allows him to move.

After he is possessed by Star Dream, President Haltmann has yellow eyes, but his appearance does not change otherwise.

Being the president of a company, Haltmann is very cool-headed and rather cold-hearted. Like with his secretary, Susie, due to being technologically advanced, he feels intellectually superior to the natives of other planets, using etiquette when speaking. Haltmann appears to despise opposition, to the point of his face turning red while throwing a fit after Kirby destroyed his Business Suit, and calling him "ungrateful" and a "savage." He also does not trust other people, keeping secrets even from Susie, and is willing to do anything for the prosperity of his company, including invading and mechanizing other planets for resources.

However, Haltmann used to have another side to him as well. He used to be compassionate, and cared very deeply about his daughter, even going as far as to use Star Dream in an attempt to revive her after he thought she was dead. Haltmann has been an ambitious man since a young age, having a livelihood in making inventions and building his company. In an interview, Shinya Kumazaki revealed several things about Haltmann. His specialties include numerals and inventions, and his hobbies include analyzing celestial bodies and climates. Additionally, his favorite food is high-class chicken. His most cherished possession is a golden pocket watch that has stopped functioning.[1]

Before the events of Kirby: Planet Robobot, President Haltmann traveled throughout the cosmos with his daughter, Susie. During his travels, he discovered blueprints for Star Dream, a powerful wish-granting supercomputer, as well as Star Dream itself. By using these blueprints and by analyzing the most advanced civilizations in the known universe, he was able to at least partially reactivate the machine, and performed numerous tests while completing it. During one such test, presumably one for Star Dream's Space-Time Transport program, a terrible accident occurred, in which Susie was warped into Another Dimension and Star Dream was apparently damaged and deactivated. Believing his daughter had died in the accident, Haltmann dedicated all his time and energy into completing and reactivating Star Dream, with the hope that he could revive his daughter and see her once again. However, Haltmann's excessive use of the incomplete machine caused him to begin losing his memories of his daughter.

By the time Susie somehow returned as an adult, Haltmann had lost almost all his memories of her and didn’t recognize her as his daughter. However, in his heart, he felt she was somewhat familiar, and thus hired her as the executive assistant of his company. Now seeking eternal prosperity for his company, Haltmann began following the business plan drafted by Star Dream: the Mechanization Occupation Project, which Susie became the overseer of, leading to the events of Kirby: Planet Robobot.

Having detected the immense amount of unused energy and uncivilized natives on Planet Popstar, the Haltmann Works Company makes the planet its next target and begins invading and mechanizing it. During the process, Meta Knight and King Dedede notice the ongoing invasion and attempt to fight back, only for the Access Ark to shoot down the Halberd and demolish Castle Dedede. Meta Knight is captured and made into a mechanical weapon, whilst King Dedede's DNA is somehow acquired to create a clone of him. Kirby - who had managed to sleep through the entire attack - wakes up in time to see the world around him completely mechanized, resulting in his setting out on a quest to restore the planet to normal.

Eventually, Kirby reaches the top of the Access Ark and is confronted by Susie, whom he had already encountered several times before. Susie soon brings out and activates an upgraded form of Mecha Knight, dubbed Mecha Knight+, and pits it against Kirby, resulting in a battle that ends in Mecha Knight's defeat and his release from Susie's control. Just as Susie is about to confront Kirby herself, however, Haltmann reveals himself from a nearby desk and dismisses Susie. After Haltmann introduces himself to Kirby and shows Star Dream off to him, the CEO explains that, in line with Star Dream's business plan, Kirby must be eliminated, and summons his Executive Suit to fight. However, Kirby triumphs over him, and destroys Haltmann's Executive Suit, briefly knocking him unconscious.

After Haltmann reawakens, he flies into a blind rage, calling Kirby and the rest of the natives wild savages. Determined to destroy Kirby and exterminate everyone else on Planet Popstar who is interfering with his plans, Haltmann docks with Star Dream and summons its control helmet; before Haltmann could use the machine, however, Susie betrays him and snatches the control helmet off his head, causing him to pass out. Planning to sell Star Dream's database to "teach Haltmann a lesson," Susie puts on the control helmet; however, Star Dream becomes sentient from absorbing Haltmann's soul and turns on her, blasting her unconscious with a laser. Star Dream then takes control of Haltmann’s now lifeless body and uses it to communicate with Kirby, declaring that all life-forms are obstacles in the way of Haltmann's wish for eternal prosperity of his company, before flying off into space to destroy all life in existence. After engaging Star Dream in an extended battle with the aid of the Halberd, Kirby and the Robobot Armor drill Star Dream's original body all the way through the Access Ark (which it had previously docked with), destroying both Star Dream and all that remained of Haltmann within Star Dream and reverting all the planets Haltmann Works had mechanized back to their original state.

In the non-canon The True Arena, Star Dream Soul OS deemed Haltmann’s soul to be unnecessary for its continued functioning and begins to erase it. During the process, Haltmann laments over himself. He questions himself as to why he reactivated such a terrible machine before finally remembering his wish to see his daughter one last time. He then berates himself for ever thinking that Star Dream could make such a wish come true in the first place. During the battle with Star Dream Soul OS's core, Haltmann can be heard crying out in agony as each pillar is destroyed. In the second phase, it is stated in the pause description that all remaining traces of Haltmann, even his memories and soul, have successfully been deleted from existence, suggesting that Kirby had unknowingly helped with the erasure of Haltmann.

In the battle, Haltmann launches his four (six when fighting the 2.0 variant) Susie-shaped drones, which home in on Kirby and leave stars on impact. He then attaches to the central platform, and spins repeatedly around it, leaving two stars when the attack concludes.

Upon losing 1/5 of his health, he lowers the central column in the battlefield, changing the arena into a straightforward one. Haltmann rises into the air, and summons a Yesman to deal with Kirby. During this time, he is practically invulnerable to Kirby's attacks. The enemy leaves a star whenever it punches. After it blows up, President Haltmann comes down, charges up, then performs a spin dash across around the circumference of the stage several times, then plows straight through the middle. He does this several times, occasionally leaving stars behind. Then he jumps into the air, hovers for a moment, then fires the ruby attached to the bottom of his mech on the ground, leaving a fire where it hits. This attack repeats several times.

When Haltmann is down to half health, he smashes a hole in the middle of the arena, making it circular again. The president fires a multitude of drones, which bombard the arena going one by one in a large circle. Haltmann then fires a multitude of Haltmann bills with his image on them into the air, which partially obscure the screen, then follows up on this by doing a spin dash around the arena, occasionally jumping across the hole and leaving stars on impact. Afterwards, Haltmann performs a series of bounces across the arena, leaving stars wherever he lands. Lastly, he summons two minions into the arena, where like before, he takes minimal damage while they are active.

When Haltmann is down to 1/5 of his health, he conjures a large square platform to appear in the middle of the arena, and conjures holes in it. He summons two Yesmen into the arena (again, taking minimal damage during this time), jumps into the cube, and causes it to fire two large beams from two of the holes opposite of each other, then two more from the other two, and all four after turning the cube. Haltmann then fires his mech like a drill through the cube, which causes him to warp after firing. After that, he fires a multitude of drones, which bombard the arena in a large wave.

Once Haltmann is defeated, he attempts to pilot his mech further, but it short-circuits and explodes on him, leaving him helpless in his chair as singed Haltmann bills rain down on him.

President Haltmann spins around a cylinder.

President Haltmann appears in his 2.0 form in Meta Knightmare Returns.

President Haltmann 2.0 jumps around the stage.

Kirby of the Stars

Haltmann appears in Kirby and the Great Planet Robobot Adventure!, the seventh entry in the Kirby of the Stars series by Mie Takase. He first appears in the book's prologue, cleaning a golden pocketwatch for a reason he cannot remember. His role for the rest of the novel is identical to his role in Planet Robobot; however, at the end of the book it is revealed that he survived Star Dream's attack and landed in the rubble of King Dedede's castle. He initially does not remember who he is, but his memories are returned after Waddle Dee gives him his pocketwatch back. Although it at first appears that he finally remembers who Susie is, he suddenly returns to his usual self, scolds her for betraying him, and marches off to plan yet another world domination.

His full name, Max Profitt Haltmann, is a pun on "Max(imum) Profit," as Haltmann is a CEO and he focuses on churning out the highest profit possible. His surname is likely based on "Hartmann" and/or "Hultman." It also conceals a reference to HAL Laboratory. 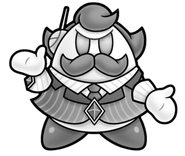 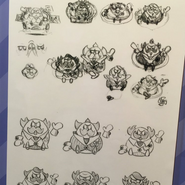 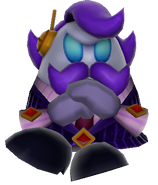