Poppy Brothers' Land is the third stage shown to the player, though he/she does not have to play this stage third.

The bottom stage of Poppy Brothers' Land has Mr. Frosty in the middle, standing above the word, "FROSTY." Two Gordos hover in the top corners. The faded word, "WARP STAR," is written between them with a Chilly sliding back and forth. Finally, three Kirby Triplets exist below the word, FROSTY. Rolling over each Kirby Triplet exactly twice will make a Maxim Tomato appear to block the drain.

Hitting the Chilly once will illuminate a letter of WARP STAR; illuminating all the letters will make Chilly explode and create a Warp Star over Mr. Frosty, which the player can leave the Pinball Land on. Hitting Mr. Frosty, on the other hand, will illuminate a letter of FROSTY; illuminating all the letters will make Mr. Frosty raise his arms up and down. Touching the mid-boss will result in him grabbing Kirby and spinning him around -- The player can launch Kirby by pressing the A Button. He/she use this to get up to the middle stage.

The middle stage has a dish marked with a K in the background, in between two large Kirbys (Stuffed Kirby and Hungry Kirby). Below them are two holes.

Two Poppy Bros. Jrs. will poke their heads out of the holes, look around, duck back into the holes, and hold a bomb. This bomb will send Kirby flying if he hits it. Hitting a Poppy Bros. Jr. before it sets up the bomb will make him duck back down and wait a short while before attempting this again.

Three doorways are built into the ceiling, and three Crack-Tweet eggs exist in the middle of the stage. A Tookey flaps around from place to place below these eggs. Hitting it three times will cause it turn turn into a Maxim Tomato, which won't be useful until Kirby hits it.

Three Poppy Bros. Jrs. wander out of the doorways toward the eggs. Kirby's goal is to hit each egg four times, and thus break all the Crack-Tweets out of their eggs; if a Poppy Bros. Jr. reaches an egg, he'll replace it with a new, undamaged egg and scurry back to his door. Kirby can send these enemies back to their doors by hitting them before the cause trouble.

Once all the Crack-Tweets are free, they will enter the doorways. They will quickly rush back out with an apple, bomb, and black Warp Star in tow. They will flee back into the doorways and start the cycle all over again if Kirby doesn't act fast. Touching the Warp Star will take Kirby to the boss of Poppy Brothers' Land. If the player has beaten King Dedede at least once when he breaks out all the Crack-Tweets, the sound of the microphone item from Kirby's Dream Land will sound and a sprite of Axe Knight will appear where the middle egg was.

The boss of Poppy Brothers' Land is, not surprisingly, Poppy Bros. Sr. He starts out on one platform, and if he's given enough time, he will lob a bomb at the nearest flipper, paralyzing it. He will immediately jump to the opposite platform and ready his next attack. After Kirby hits him three times, he will jump into the center and split into two Poppy Bros. Srs.. Each will land on a platform and prepare to attack the flippers. Each Poppy Bros. Sr. can be destroyed in three hits. If Kirby lands on the Warp Star, he will be sent back to the top stage of Poppy Brothers' Land. Defeating Poppy Bros. Sr. will grant Kirby a key, which he must pick up to finish his business in the Pinball Land. 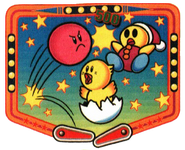