This article is about the mini-boss. For the younger, immature enemy, see Poppy Bros. Jr.

Poppy Bros. Sr. (also known as Poppy Bro. Sr.) is a common recurring mini-boss in the Kirby series that resembles a jester and hops back and forth throwing bombs. He is often said to be Poppy Bros. Jr.'s older brother. Kirby must inhale and spit his bombs back to defeat him.

Depending on the game, Poppy Bros. Sr. gives either the Crash or Bomb ability.

Poppy Bros. Sr. looks like a normal Poppy Bros. Jr. only he is taller, has small legs, and long yellow shoes curved at the tips.

Poppy Bros. Sr. is the first mini-boss encountered in the game. He appears in Green Greens and ambushes Kirby as soon as he gets off of the Warpstar. Poppy Bros. Sr. hops about sometimes throwing a bomb, or making a large hop across the stage.

In extra mode Poppy Bros. Sr.'s large hop is replaced with a quick dash that can be hard to dodge.

Poppy Bros. Sr. is almost exactly the same as his appearance in Kirby's Dream Land, however after being defeated his body stays around for a little while and can be eaten for the powerful Crash ability. He also can't do the dash attack from Kirby's Dream Land's extra mode.

In some of the later stages two Poppy Bros. Sr. appear at once and must both be fought at the same time.

Poppy Bro. Sr. has only 80 HP, the lowest out of all the bosses.

Poppy Bros. Sr., alongside other antagonists King Dedede and Mr. Frosty, was slated to appear in the Nintendo 64 version of Kirby Air Ride (then titled Kirby's Air Ride). Whether he was playable or not he was never revealed due to the cancellation of the game. He does not appear in the GameCube version.

Poppy Bros. Sr. was given an entirely new design in this game. But because the game was never released, this design never saw the light of day.

Two Poppy Bros. Sr. are fought as bosses in the game.

A single Poppy Bros. Sr. appears as a boss in the game.

He appears as an opponent in the game.

Kirby: I'll breathe in your pathetic bombs and send them right back at you!

Poppy: Stalemate...Okay, let's compete in a quick game of Avalanche! 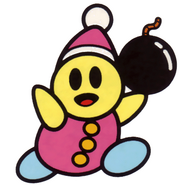 Kirby Super Star Ultra
Add a photo to this gallery
Retrieved from "https://kirby.fandom.com/wiki/Poppy_Bros._Sr.?oldid=125084"
Community content is available under CC-BY-SA unless otherwise noted.