Kirby Wiki
Register
Don't have an account?
Sign In
Advertisement
in: Enemies, Characters, Articles with non-canonical information,
and 14 more
English

Poppy Bros. Sr. (also known as Poppy Bro. Sr.) is a semi recurring mid-boss in the Kirby series that resembles a jester and hops back and forth throwing bombs. He is often said to be Poppy Bros. Jr.'s older brother. Kirby must inhale and spit his bombs back to defeat him.

Depending on the game, Poppy Bros. Sr. gives either the Crash or Bomb ability.

Poppy Bros. Sr. looks like a normal Poppy Bros. Jr. only he is taller, has small legs, a frilly collar, and long yellow shoes curved at the tips. His outfit may also vary in color with it appearing most often in blue, but he can also appear red, yellow, pink, and green.

Poppy Bros. Sr. is the first mid-boss encountered in the game. He appears in Green Greens and ambushes Kirby as soon as he gets off of the Warp Star. Poppy Bros. Sr. hops about sometimes throwing a bomb, or making a large hop across the stage.

In Extra Mode, Poppy Bros. Sr.'s large hop is replaced with a quick dash that can be hard to dodge.

Poppy Bros. Sr. is almost exactly the same as his appearance in Kirby's Dream Land, however after being defeated his body stays around for a little while and can be eaten for the powerful Crash ability. He also can't do the dash attack from Kirby's Dream Land's extra mode.

In some of the later stages two Poppy Bros. Sr. appear at once and must both be fought at the same time.

Poppy Bros. Sr. appears as a boss in Poppy Brothers' Land. He starts out on one platform, and if he's given enough time, he will lob a bomb at the nearest flipper, paralyzing it. He will immediately jump to the opposite platform and ready his next attack. After Kirby hits him three times, he will jump into the center and split into two Poppy Bros. Srs.. Each will land on a platform and prepare to attack the flippers. Each Poppy Bros. Sr. can be destroyed in three hits. If Kirby lands on the Warp Star, he will be sent back to the top stage of Poppy Brothers' Land. Defeating Poppy Bros. Sr. will grant Kirby a key, which he must pick up to finish his business in the Pinball Land.

He appears as the fourth opponent that Kirby must face in the single player game, and the first in the normal mode of the Avalanche competition, following Waddle Doo and preceding Whispy Woods. He is also one of the avatar's for the second player in VS. Poppy Bros. Sr.'s dialogue with Kirby is as follows.

As the first competitor in the normal mode of the game, Poppy Bros. Sr.'s AI is rather weak. He will play passively, rarely drop blobs, and struggle to perform combos. Additionally, blobs are falling at a very slow rate, allowing Kirby to gain a substantial amount of time to perform combos against him. Unlike the tutorial stages, all five blob colors are used from this point forward, further hindering Poppy's ability to create combos.

Poppy Bros. Sr. appears as a boss in Poppy Bros. Sr.'s stage. He hops across three platforms and occasionally drops a bomb in hopes of hitting (and shrinking) the player's bottom paddle. Like the other bosses, Poppy Bros. Sr. has 12 HP.

Poppy Bros. Sr., alongside other antagonists King Dedede and Mr. Frosty, was slated to appear in the Nintendo 64 version of Kirby Air Ride (then titled Kirby's Air Ride). Whether he was playable or not he was never revealed due to the cancellation of the game. He does not appear in the GameCube version.

Poppy Bros. Sr. was given an entirely new design in this game having visible stars on his outfit and had arms instead of his hands floating. But because the game was never released, this design never saw the light of day. 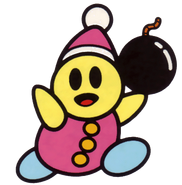 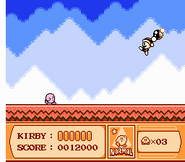 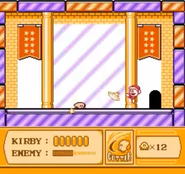 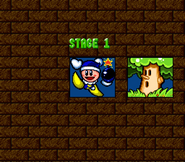 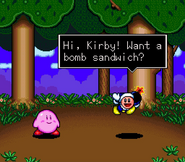 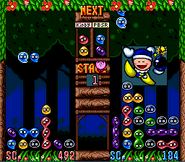 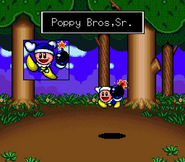 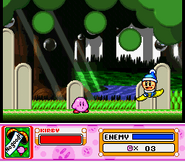