Poppy Bros. Jr. (also known as Poppy Bro. Jr.) is a regular enemy in the Kirby series. His appearance is based on an elf.

He is usually seen hopping back and forth around the stages he appears in. Sometimes Poppy Bros. Jr. can be seen riding on apples or, more rarely, on a Maxim Tomato. Poppy Bros. Jr. either gives no Copy Ability, the Bomb ability, or the Cutter ability depending on whether he is unarmed, throws bombs, or throws boomerangs.

Poppy Bros. Jr. resembles an elf with a wide smile and a somewhat humanoid appearance with a distinct head and torso. However, he has no arms and his round hands float independently from his body appearing only when needed. He wears a blue floppy hat with a white pom-pom on the end and white trimming around the rim of the hat. His clothes are the same color as his hat and have two yellow buttons on them. He also wears yellow pointed shoes in most of his appearances. Like most Kirby enemies, he may also appear with a different color scheme. In Kirby: Nightmare in Dream Land and Kirby's Return to Dream Land, he wears green shoes.

Poppy Bros. Jr. can be seen hopping around merrily, or riding on bear-like enemies called Grizzos. He also may be seen rolling on large apples, which hurt Kirby if he crashes into them. He only appears in the Green Greens stage.

Poppy Bros. Jr. appears alongside his older sibling in this game, albeit being a great deal rarer. He still hops around and rolls on apples. He is also seen rolling on Maxim Tomatoes. If Kirby wishes to eat the tomato, he must first Inhale it before attacking Poppy Bros. Jr.

Since this game does not have the Bomb ability, inhaling Poppy Bros. Jr. will give the player nothing. In the remake Kirby: Nightmare in Dream Land, Poppy Bros. Jr. has green shoes instead of the yellow he wears in most of the series.

On the top stage, Poppy Bros. Jrs. try to hinder the player. While Kirby has to hit each Crack-Tweet egg four times, Poppy Bros. Jrs. slowly walk out through doors, take the eggs, and replace them with new, undamaged eggs. This slows the player's progress. If Kirby hits a Poppy Bros. Jr. on this stage, he will win 500 points and the enemy will retreat back into a door.

In Kirby Super Star, he has yellow clothing with a pink trim, unlike the other ones in other games which are blue among other (and less common) colors. He returns with some of the same tactics, along with some new ones. There are three kinds: The regular ones, the bomb-throwing ones, and the boomerang-throwing ones. Regulars walk around or roll around on apples and give no ability, and have no real forms of attacking; the bomb-throwing ones, obviously, throw one or three bombs and give Kirby the Bomb ability (and also serve as the Helper for the same ability, who wears blue clothing). He can also perform Throw Bomb and Bomb Set underwater. The boomerang-throwing ones give Cutter.

In Kirby Super Star Ultra, he returns with the same function. In Revenge of the King, he is replaced by stronger, more aggressive mime-like enemies called Perot. One can play as a Poppy Bros. Jr. in Helper to Hero. In Helper to Hero, he is wearing pink instead of blue.

In this game, Poppy Bros. Jr. will either walk around or remain stationary and throw bombs at Kirby. He is a very common sight to see in this game, but is rarer than he is in their other games.

In Kirby: Triple Deluxe, Poppy Bros. Jr. has the same tactics and a nearly identical appearance to his Kirby's Return to Dream Land counterpart; the only difference is that his face is now a shade of salmon rather than peach. However, Poppy Bros. Jr. can now throw bombs at the player from the background with a sharper aim.

Poppy Bros. Jr. acts identically in Kirby: Planet Robobot, but his skin has reverted back to its peach shade from Kirby's Return to Dream Land.

Poppy Bros. Jr returns in Kirby Star Allies, where he is the first Friend Helper to be friended by Kirby (if the player does not spawn a Blade Knight before encountering him), although he does not have a main role in this game. He has the same tactics he had in Kirby's Return to Dream Land. The Helper version of Poppy Bros. Jr. dons the same party hat that Bomb Kirby uses. Like Kirby, Poppy Bros. Jr. can utilize the Friend Ability techniques, like allowing his bombs to be empowered by Ice.

When Phan Phan escapes, the N.M.E. Sales Guy turns to Dedede to help return him. Dedede is angry at him and tells him that he should be ashamed for letting him escape. But NME Salesman says that he wasn't in his care at the time. He goes on to explain that he was at the "Monster Training School." Poppy Bros. Jr. is one of the few monsters to be shown in the training school. He, along with Hot Head, is a member of the Snow Class, which is the strongest of the whole school, which is ironic because he is considered to be one of the weakest enemies. He is shown wearing roller skates. It is not known what becomes of him after Nightmare is destroyed, neither is it known if he even finishes training school and becomes a full-fledged monster by the end of the series.

A trophy of Poppy Bros. Jr. appears in Super Smash Bros. for Wii U. Like several other Kirby trophies in the game, the enemy uses his model from Kirby's Return to Dream Land.

Poppy Bros. Jr. appears as a primary Novice-class grab spirit in Super Smash Bros. Ultimate which can be obtained after fighting a blue Young Link who favors using his down special, Bomb, in midair. This spirit sports no effect when applied. 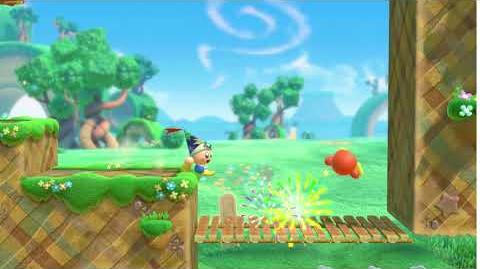 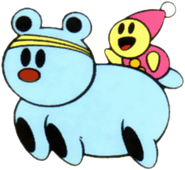 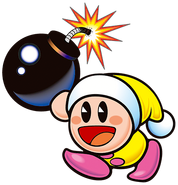 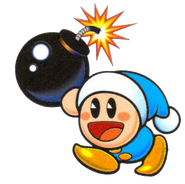 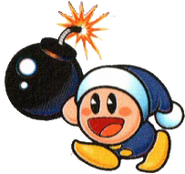 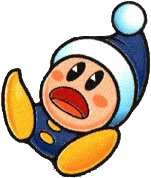 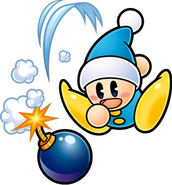 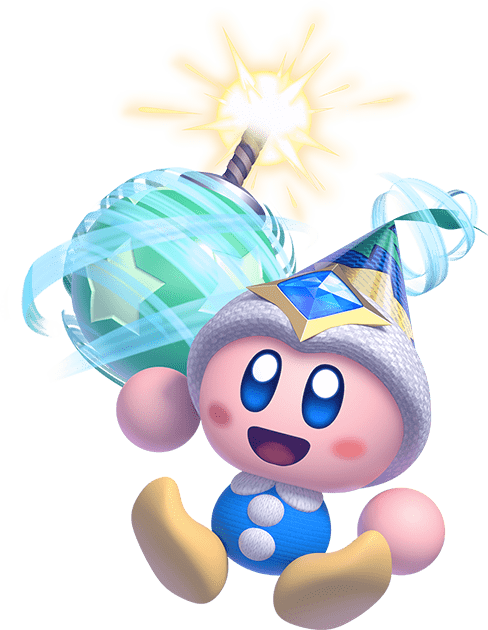 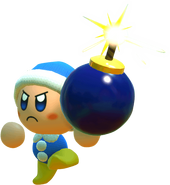 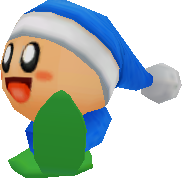 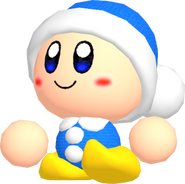 Kirby Star Allies
Add a photo to this gallery
Retrieved from "https://kirby.fandom.com/wiki/Poppy_Bros._Jr.?oldid=315584"
Community content is available under CC-BY-SA unless otherwise noted.