Popon is an enemy appearing in Kirby's Dream Land 3, and a tall towering monster in Kirby: Right Back at Ya!, which is able to regenerate and hurl spherical segments of its body that explode into an acidic goop on contact.

Its appearance in Kirby: Right Back at Ya! was when it disguised itself as Chef Shiitake, where it took the guise of Chef Kawasaki's teacher and tried to eat Kirby. After Kawasaki foiled this plot, however, Popon removed its guise and attacked.

Popon is a towering monster that is made up of light green balls, all of them merged upright in a row. It can hurl these globs, and the moment a glob leaves its body, another is formed. It has no mouth (although it can speak in the anime), but has two googly eye style eyes on its highest segment.

In Kirby Star Allies, it went through a minor redesign with it having a brighter green color and shiny eyes.

Popon made its only appearance as an enemy in this game. It is a minor enemy who just moves about on the ground. At first, it is just one spherical blob, but when Kirby comes close enough Popon gains four more sections and becomes a tower of up to five blobs, afterwards proceeding to throw four of his sections at Kirby. When he runs out of sections to throw he returns to his initial appearance and starts to move about again. Popons make their first appearnace in the second stage of Grass Land.

Popon reappears in the Goal Game. When Kirby (and any Friends or Dream Friends he has along with him) leaps down from his cloud, he lands on a platform balancing on Popon's head. The impact initially squishes it down, but it then stretches out again, launching the hero or heroes into the sky towards the clouds like on a trampoline.

Appearing in the episode The Big Taste Test, Popon took the disguise of Chef Shiitake, Chef Kawasaki's old teacher. When news spread that Shiitake was arriving, Kawasaki went bonkers trying to prepare food that actually tasted good, while Escargoon and King Dedede hatched a plot to impress Shiitake. They were given a cookbook by Chef Shiitake himself, which told them about the legendary ingredient, Zebon. They switched the picture of Zebon with an image of Kirby to fool Kawasaki. Popon is thought to be made of Zebon, although it is unconfirmed

The chef discovered the book, and promptly attempted to cook Kirby, although he didn't have the heart, as Kirby loved his cooking, and considered Kawasaki his friend. However, Shiitake/Popon wanted to eat Kirby, and flew into a rage when he couldn't. Accidentally exposing himself by calling the real Shiitake's dishes dirty, and admitting that he knew that it was Kirby he was going to eat, Popon transformed into his true form, and attacked.

At first, it seemed that it was useless, as no attack had any affect. However, Kirby inhaled Kawasaki's frying pan and became Cook Kirby, he overpowered Popon with an oversized frying pan, and threw him into orbit to the sun. Popon was fried and eventually made its way back to Popstar. Dedede took a sample of the fried Popon and ate it. He then declared it was the best thing ever, and decided to make Kirby Top Chef (which is surprising, considering that they are rivals) and fires Kawasaki. The episode ends with Kirby happily displaying his new chef's hat and badge, displaying King Dedede's symbol, with Chef Kawasaki sobbing in the background. 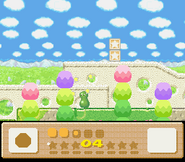