Pon & Con (also called PonCon) are recurring bosses in the Kirby series. They are always fought together in the form of a tag-team. In Kirby: Right Back at Ya!, Pon & Con appear as friendly characters who live alongside other animals in Acore's roots, and make small appearances every so often.

While they are also referred to as Raccoon & Fox,[1] Pon & Con are most likely intended to be a tanuki (Japanese raccoon dog) and kitsune (a yellow-furred fox) as well-known creatures of traditional Japanese folklore. Both creatures are known for being mischievous and the power to shape-shift (kitsune, the Japanese word for fox, also fits in this context). They were likely localized as a raccoon and fox, respectively, because foreign audiences would not be familiar with the mythology.

Pon is a round pudgy raccoon with a creamy brown coat of fur and a light gray underbelly. He has small black hands, feet, and ears, although his hands and feet are sometimes absent in his in-game sprites and some official art. His tail consists of a round ball the same color of the rest of his body. However in Kirby Star Allies, his tail is long and striped, which makes it more similar to an actual raccoon tail. In the anime, Pon keeps the same basic design, except he has a different color palette. His fur is still dark brown, but his underbelly and snout are a pinkish-tan color. The anime incarnation of Pon is very similar to his in-game design, the main difference being that the anime version always has his feet showing. In the anime, Pon also has fingers on each hand.

Con is a fox with bright yellow fur (slightly creamier in-game) and slanted eyes. He has yellow fur on his underbelly that extends to the tip of his snout. He has a blackish-brown button-shaped nose and a fluffy white and yellow tail. His body is round, but not nearly as much as Pon's. He has pointy yellow and white-tipped ears roughly the same size as his head. The outlandish color of his fur is explained by the fact that in Japanese mythology, kitsune are commonly portrayed with shimmering golden fur.

The anime version is actually noticeably much different than his in-game appearance. Con's head and ears are much smaller and are now in proportion with the rest of his body, his tail is shorter and rounder, and his coloration appears more dull and has a somewhat green-hue as opposed to the bright yellow fur featured in Kirby's Dream Land 3. Like Pon, Con's feet and arms are always visible in the anime.

Pon and Con serve as the bosses of Sand Canyon. They fight at the same time like the team bosses from previous games. The battlefield the fight occurs in consists of two layers of platforms and a ceiling above that constantly drops down spiked bombs. Before Pon and Con appear, several miniature versions of the duo march out into the open. Kirby simply has to inhale these small little creatures and spit them back out at the real Pon and Con while simultaneously avoiding the falling bombs. The duo have no real form of attacking besides just running into Kirby. However, large spiked bombs drop from the sky throughout the entire battle that force Kirby to always remain moving. Pon and Con often lead Pon Jrs. and Con Jrs. behind them, so they are often protected from back attacks. When not trailing behind one of the actual bosses, their junior versions will sometimes venture out on their own.

If all the Heart Stars are collected for Sand Canyon after the duo is defeated, the two will be cured of their animosity caused by the dark cloud hovering over Planet Popstar, and peacefully march around the arena along with the miniature animals whenever Kirby enters their arena again. In Boss Butch, the duo fight in an ash-covered volcano area as opposed to the desert. The two make their last appearance during the credits alongside the rest of the game's bosses as they socialize with Kirby.

Pon and Con make a cameo appearance as one of the keychain collectibles Kirby can obtain.

Pon and Con make a cameo appearance on page 19 of the Secret Diary, alongside several other characters. They are dressed in bow ties and bowler hats for a comedy special that is playing on the "junky old TV" Elline watches.

Pon & Con return as the fourth boss in Kirby Star Allies, and are fought in the stage Gatehouse Road, with the boss title of Dual Defenders, guarding the gates of the Fortress of Shadows - Jambastion. Their battle functions the same as it did in Kirby's Dream Land 3, except for the fact that Pon Jrs. and Con Jrs. can drop larger elemental bombs. In their second phase, Pon and Con gain the ability to dash quickly across the screen. After their defeat, Kirby must throw a Friend Heart at them so that they open the gates for Kirby and his friends.

On the Mareen Moon in Far-Flung Starlight Heroes, a similar, albeit stronger duo named Goldon & Silvox is fought. 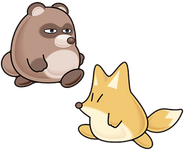 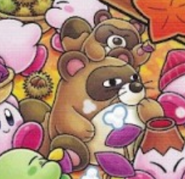 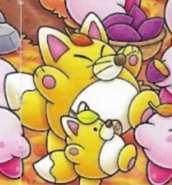