Regular enemy
Polof is a rabbit-like enemy in the Kirby series that appears only once in Kirby's Dream Land 3. It's quite skittish and, instead of attacking Kirby, it runs for its "burrow" when approached, leading Kirby to a secret room filled with treasure.

Polof resembles a Waddle Dee with the physical features of a rabbit. It is brown with large ears and a light pink stomach. Like a Waddle Dee it has no visible mouth, and it's stomach marking is reminiscent of a Waddle Dee's distinctive facial markings. It hops about on tiny red feet.

When it disappears it briefly turns it's back to the camera revealing a fluffy pink rabbit's tail.

Polof only appears in the first level of Sand Canyon. It doesn't attack in any way; instead it hops forward until it reaches a certain spot and then disappears into the background. If Kirby then walks to the spot where the Polof disappeared and presses up, he will find a hidden room with a 1UP and 12 star pieces. The Polof will not reappear after he exits the room. 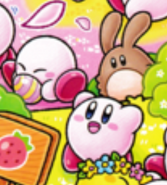 The secret room Polof disappears into.