A red, yellow, and black striped crown resembling a coral snake, with a skull-shaped gem at the crest, surrounding a bubbling vortex of a bluish-purple poisonous liquid.

Poison is one of three Copy Abilities introduced in Kirby: Planet Robobot. It appears to be similar to the Water Copy Ability from Kirby's Return to Dream Land.

As mentioned above, Poison is similar to the Water ability in many respects; Kirby can release spouts from his hat, slide around on a trail of poison, and throw poison blobs around. However, many of the Poison ability's attacks leave behind damaging residue (such as puddles or clouds) that can inflict continuous damage on enemies that touch them. 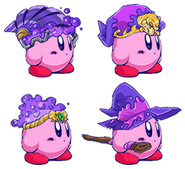