Kirby Wiki
Register
Don't have an account?
Sign In
Advertisement
in: Articles with derivative titles, Enemies, Characters,
and 2 more
English

Pluid is an enemy in the Kirby series, debuting in Kirby's Return to Dream Land. It yields the Water ability when inhaled.

Pluid is a blob of water about Kirby's size. It has two small red eyes with a blue ring around each.

Pluid hangs around on the ceiling, usually with others of its kind nearby, and drops to the floor when Kirby approaches. When on the ground, Pluid will simply hop around.

Pluid's name is a portmanteau of "plewd," a drop of perspiration frequently drawn in cartoon media, and "fluid," which is liquid matter. Both of these words reference the enemy's watery body. Its name could also be a reference to the French word for rain, "pluie". 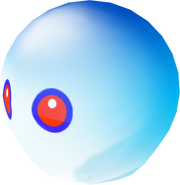