Plugg is an enemy resembling a walking electrical plug, who originated in Kirby 64: The Crystal Shards. He usually yields the Spark ability when inhaled, but in games where the Plasma ability is present, he yields that ability instead. He also serves as the Plasma ability's Friend in Kirby Star Allies.

In Kirby 64: The Crystal Shards, Plugg resembles a cyan outlet plug with round, black eyes, yellow prongs, and green feet.

In Kirby Star Allies, he still retains his original appearance, though his body appears slightly more greenish, his prongs are now noticeably shorter and have holes in them. The bottom of his backside now has a single screw present. As a Friend, Plugg wears the crown portion of the Plasma hat, with sparks emanating from his prongs. Like all Friends, he assumes a yellow color scheme as player 2, blue as player 3, and green as player 4.

Plugg attacks by jumping into the air, flipping upside-down, and "plugging" himself into the ground, which shoots two electrical currents (that end with electrical balls) across the ground from each side. When held above Kirby's head, Plugg does nothing. If Kirby throws Plugg and he hits a wall, he sticks to the wall for a short while.

Plugg reappears as a regular enemy and as a friend in Kirby Star Allies.

In Kirby Fighters 2, a miniature Plugg appears inside the Zap Weapon item. When the Zap Weapon is attacked, the mini Plugg generates electricity that forms into an electric orb that homes in on opponents.

Plugg is named after the object he resembles, a plug. 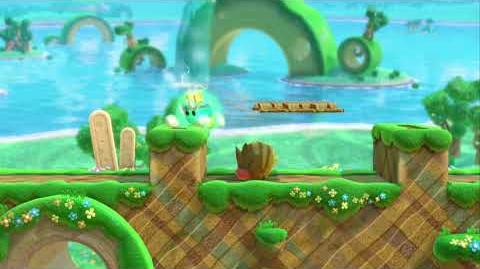 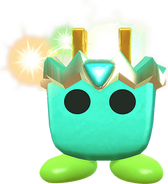