Platinum crown with a greenish blue gem at the crest with large plumes of yellow-green plasma. Kirby turns pale in Kirby Super Star and green in its remake.

Plasma is one of Kirby's Copy Abilities, first seen in Kirby Super Star.

Plasma is somewhat similar to Spark in the sense that the two abilities focus on green electricity/plasma. The differences between the two are similar to the Freeze and Ice abilities (or the Fire and Burning abilities), in that the two abilities have different styles of attack. Plasma mostly has projectile-based attacks, while Spark's attacks are usually stationary. As of Kirby: Squeak Squad, however, the Spark ability has shown elements of Plasma, such as rotating the +Control Pad to build up an electrical blast that can pass through walls and damage enemies.

Unlike other abilities, Kirby stores up energy every time the +Control Pad is pressed (in Kirby Star Allies, he also does this when the controller is shaken). The more power that is built up, the stronger the projectile Kirby will fire, and at maximum power, Kirby's body begins to glow, covered in an electrical "shield". If the shield is not fired, it acts as a force field that protects him from projectiles, enemies, and other such baddies. At full charge, Plasma Wave's range is essentially infinite, and the projectile travels until it hits an enemy or wall. This makes it the furthest-hitting Copy Ability in the game, not counting single-use ones like Crash, or Magic in Kirby & The Amazing Mirror.

Kirby passively loses one charge per second if he has any built up. When any projectile is fired, all the built-up charges are expended. To gather charges without actually moving, Kirby can guard to fix his position, then press the directional buttons. However, this strategy does not work in Kirby Star Allies, as Kirby will dodge instead.

Plasma does not exhibit passive charge loss nor give the Plasma Shield at full charge in Kirby Air Ride, and Kirby cannot charge the Air Ride Machine without firing the full charge built up on the gauge, since both actions share the same button.

Plasma's attacks were merged into the Spark ability in Kirby's Return to Dream Land; Spark now possesses several of Plasma's attacks, including the arrow, the laser, the wave, and the barrier.

Despite this form of Spark appearing in both Kirby: Triple Deluxe and Kirby: Planet Robobot, Plasma makes a reappearance in Kirby Star Allies, effectively replacing Spark in the game. The former also has some additional moves. It uses the hat seen in Kirby Air Ride, but doesn't turn Kirby green. Plugg appears as its friend, rather than Plasma Wisp. If the player makes rapid inputs on both the analog stick/+Control Pad and the controller's motion sensor at the same time, Plasma can charge its strongest attacks extraordinarily fast in this game. Alternatively, players can move freely while charging with just the motion sensor.

The name of the ability, Plasma, is derived from the real-life state of matter with the same name, usually a ionized gas with unique properties. Strong electrical charges are often associated with it.

All built-up charges are expended when any projectiles are fired. 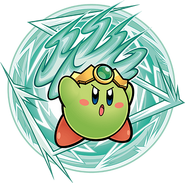 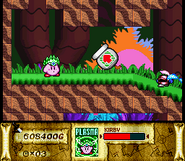 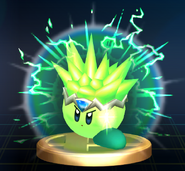 As of Kirby's Return to Dream Land, almost all of Plasma's attacks are given to the Spark ability 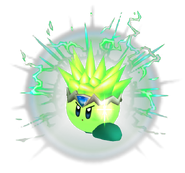 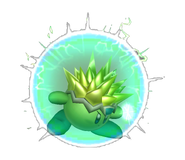