Piyo & Keko are a pair of characters that appear in Kirby's Dream Land 3. They appear in the second level of Cloudy Park. Keko wants Kirby to pop the balloon Piyo is on using Needle. If Kirby pops the balloon holding Piyo, Kirby will earn a Heart Star at the end of the level.

Piyo is a small yellow chick, and Keko is a large white chicken. 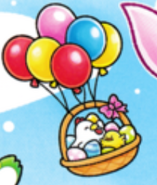 Piyo suspended by a balloon.