Pierre looks like a small yellow clown who has two cross-shaped eyes. Pierre has a big red nose and red mouth. He wears red pants that fit his legless body and comes complete with a belt. Pierre also has two white gloves on his hands and a blue cone hat on his head. 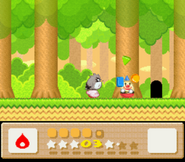