Kirby Wiki
Register
Don't have an account?
Sign In
Advertisement
in: Articles with derivative titles, Enemies, Characters,
and 5 more
English

Regular Enemy
Pierce is an enemy in the Kirby series, debuting in Kirby's Return to Dream Land. It yields the Spear ability when inhaled.

Pierce is a brown and yellow bee-like creature with two beady black eyes. It wears what seems to be a purple helmet. The foe carries a spear and hovers in the air with its two purple wings.

Pierce is often found floating in place. If it spies Kirby, the enemy will slowly approach him and attempt to jab him with a quick spear strike. Pierce makes its first appearance in the level Onion Ocean.

Pierce appears in the Wing Challenge.

Like many enemies in this game, Pierce can cross planes freely. Some Pierces hover on and off the path, while others pursue Kirby by flying after him when he's situated on a different plane. 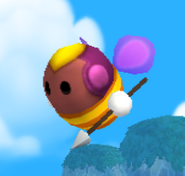 Pierce approaches Kirby from the background. 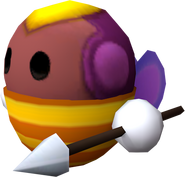