Phan Phan is a recurring mid-boss in the Kirby series, debuting in Kirby: Nightmare in Dream Land.

Phan Phan is based on an elephant. Its main body resembles a gray elephant head, with two large, floppy ears, two legs, and a long trunk that it uses to grab and toss Kirby. Phan Phan can also roll up into a ball and propel itself forwards or upwards with great velocity.

Phan Phan replaces the similar but more aggressive Rolling Turtle from Kirby's Adventure. Its speed and aggression vary by color, with its most aggressive form being the hidden green variation in later stages of the game.

It will attack Kirby by rolling into him, throwing him around, or throwing apples at him, which are similar to Whispy Woods's apples. Kirby may inhale the apples and spit them back. When Phan Phan is defeated, Kirby may inhale it to get the Throw ability.

Phan Phan appears in the Mustard Mountain, Carrot Castle, Peppermint Palace, and Candy Constellation levels. It is noticeably more aggressive at Mustard Mountain than most of its other appearances. Other than that, Phan Phan's attack patterns remain largely unchanged.

Phan Phan makes a cameo appearance in this game as one of Paint Roller's paintings in Paint Panic.

Phan Phan makes an unexpected appearance in Revenge of the King as a mid-boss, along with the other Kirby: Nightmare in Dream Land mid-bosses Fire Lion, Mr. Tick Tock, and Grand Wheelie. As Throw continues to be absent in Kirby Super Star Ultra, it gives the Suplex ability instead. Phan Phan's attack patterns remain unchanged, although it has noticeably higher health than in other appearances. Phan Phan, along with the other aforementioned Mid-Bosses, were sent to attack Kirby in The Revenge.

It is fought in Purple Plants, taking the place of Poppy Bros. Sr. from Spring Breeze, and is faced again in The Revenge. In Purple Plants, Phan Phan appears with its usual grey color, while in The Revenge, it has an orange palette color instead. It also appears in The True Arena along with the other aforementioned mid-bosses, and shares a life bar with them as part of a boss called True Mid-Boss All Stars.

Phan Phan is an ally of Kirby in the anime, first appearing in the episode Cowardly Creature. It was first shown escaping from Nightmare Enterprises and scared everyone in Cappy Town. Surprisingly, Phan Phan was actually more afraid of everyone than they were of it. King Dedede attempted to attack Phan Phan but was stopped by Kirby. Kirby and his friends then showed the shy elephant their kindness and Phan Phan was happy to befriend Kirby. They were later seen having fun playing at a pond. They were just doing so when Dedede showed up with Whippy, the training monster, who gave Phan Phan an electric shock, turning it evil in the process. Thankfully, after Whippy was defeated with Throw Kirby, Phan Phan was back to normal, and everyone welcomed Phan Phan to its new, permanent home in Dream Land. Phan Phan is later seen having took up residence in Whispy Woods Forest (all subsequent references to Phan Phan are removed in the dub, as Phan Phan was never introduced until the CW run of the show). Phan Phan's last appearance is in Cappy Town Down, as a cameo. It, along with Whispy Woods and the other wildlife, watched the Halberd's ignition.

Phan Phan's name is a reduplication of the "-phan-" part of "elephant," the animal Phan Phan is based on. 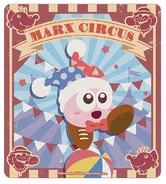 Kirby Pupupu Train artwork
Add a photo to this gallery